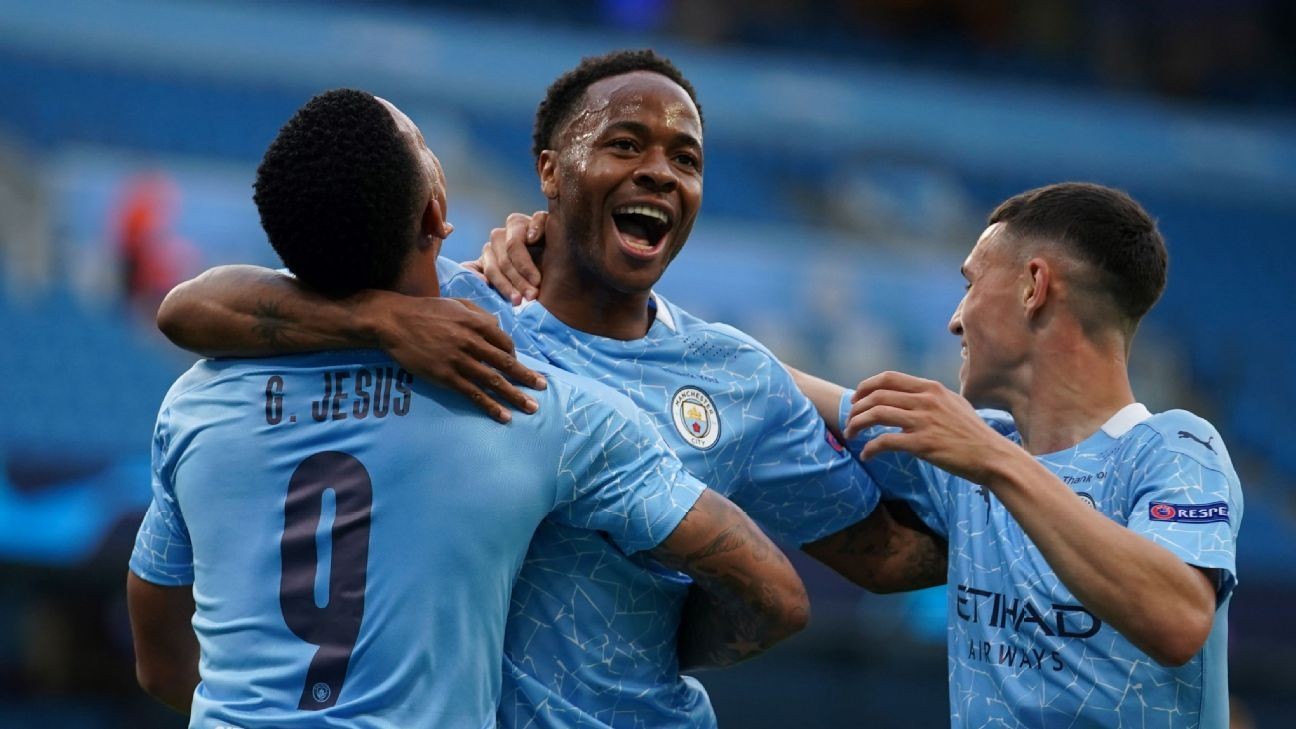 MANCHESTER, England -- For a club that has endured some agonising luck in the Champions League over the years, Manchester City will feel that they hit the jackpot on the night that Pep Guardiola's team qualified for the quarterfinals by sending Real Madrid crashing out of the competition with a 2-1 victory.

Not only did City bring an end to Zinedine Zidane's incredible run of success in the tournament with Real -- this was the first time Zidane had suffered an elimination from the Champions League as coach -- Guardiola's players walked off the pitch at the Etihad Stadium to be greeted by the news that Cristiano Ronaldo and Juventus will not be blocking their path to European glory in the final-eight tournament in Lisbon next week following their shock exit at the hands of Lyon in Turin.

City ended the hopes of one juggernaut (Real) themselves, but Lyon removed another in the shape of Juve, and that is only good news for Guardiola and his team. Lyon will be no pushover at Estadio Jose Alvalade next Saturday -- the French club beat City at the Etihad in last season's group stage before earning a 2-2 draw at home -- but after comfortably dispatching Real in this delayed round-of-16 tie, City will travel to Lisbon knowing that they have arguably their best-ever chance to win the Champions League for the first time.

Guardiola, unsurprisingly, insisted that his team cannot be complacent against Lyon after this victory.

"It is one step," Guardiola said. "If we think that is enough, we will show how small we are. If you want to win, you have to beat the big clubs, but we are here to try and win the Champions League.

"I just spoke with the scouting department [about Lyon] and they told me to be alert. We have eight days to prepare for it. We will enjoy it and then after we will think about Lyon."

This City side still have their flaws, but in victory against Real, they showed a growing maturity in this competition that enabled them to overcome their defensive frailties and the absence of injured striker Sergio Aguero.

Yes, City were 2-1 up from the first leg in the Santiago Bernabeu, but Zidane's Real remain a team packed with Champions League-winning experience and the likes of Luka Modric, Toni Kroos, Raphael Varane and Karim Benzema have seen it and done it far more often than their opposite numbers in blue shirts. But aside from Benzema, whose stunning first-half header gave Real hope of progression, the rest were out-run and out-thought by City. Eden Hazard was another high-profile disappointment for Real, with the former Chelsea forward barely touching the ball before being substituted midway through the second half.

After knocking out Real Madrid, Manchester City's path to the Champions League final looks that much more achievable. DAVE THOMPSON/POOL/AFP via Getty Images

This performance by City highlighted how they have grown into this competition and no longer feel intimidated by illustrious opposition. They dominated possession and the tempo of the game, with Guardiola's forwards buzzing around Real's defenders to force the mistakes that led to both goals -- Varane was the guilty Real player on both occasions -- while in midfield, City refused to allow Real to play through middle, forcing them to attempt to cross aimless balls into the penalty area that were largely dealt with by Ederson.

The absence of supporters inside the stadium due to the strict COVID-19 protocols in place denied this game the atmosphere that it deserved. In normal times, it would have been a night that would have gone down in the annals of City's history. It still will, but fans will sadly be unable to talk about the night that their team truly came of age in Europe by beating Real Madrid.

This victory will nevertheless give City the belief that they can now go all the way.

Since being eliminated by Real at the semifinal stage under Manuel Pellegrini in 2016, City have seen their Champions League hopes ended by Monaco, Liverpool and Tottenham during Guardiola's reign, but they have now sent Real out, so none of the remaining teams will worry City. Lyon will be concerned about stopping Raheem Sterling and Gabriel Jesus from adding to the goals they scored against Real, while they must also find a way to nullify the threat of Kevin De Bruyne. And if City get past Rudi Garcia's team, a likely semifinal against either Bayern Munich or Barcelona will see them go into that game on an equal footing with one of Europe's most prestigious clubs.

After beating Real, City are just three wins from lifting the European Cup, so they are tantalisingly close. And this time, they look ready to win it.

"The players will go to Portugal to try to make the next step," Guardiola said. "We know exactly what team we beat."