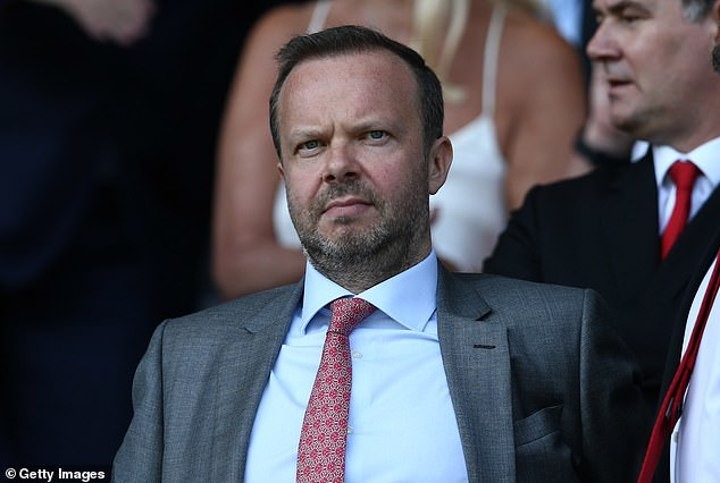 January 28. Hooded thugs descend on Ed Woodward's family home in Cheshire, hurling flares over the gate, spraying graffiti on the walls outside and chanting that Manchester United's executive vice-chairman 'is going to die'.

At the previous home game, a 2-0 defeat by Burnley, the atmosphere inside Old Trafford turns toxic as supporters round on Woodward and United's owners, the Glazers.

United have won two in seven games. Marcus Rashford could be out for the season with a back fracture. Paul Pogba is out with a persistent foot injury and has played only eight times all season.

United have hit a brick wall in negotiations with Sporting Lisbon over Bruno Fernandes.

Hours before the despicable attack on Woodward's home, however, the tide begins to turn.

United make a breakthrough over Fernandes. Odion Ighalo is signed as a short-term replacement for Rashford. Ole Gunnar Solskjaer's side then put together an 11-match unbeaten run that includes eight victories. Fernandes and Ighalo are instant hits.

When the coronavirus outbreak forces football to shut down, United are three points off the top four and advancing in the Europa League and FA Cup.

While the club's progress is brought to a temporary halt, an equally impressive performance off the pitch is only just beginning, as Woodward and the Glazers lead United's response to the pandemic. And a brilliant response it has been, too, allowing many within the club and its fanbase to take pride.

Of course, United are by no means the only ones to emerge from this crisis with credit. Football has used its universal appeal to fund, support and help the national effort in so many ways. But a club that has not always enjoyed the most polished of PR images is emerging from lockdown looking all the better for it.

Even before the shutdown, United were applauded for their decision to compensate fans who were unable to see the Europa League tie against LASK Linz played behind closed doors in Austria.

Since then, United have offered season ticket holders refunds or rebates if their remaining home games are also played behind closed doors, while donating a further £240,000 to youth charities around the world through the Manchester United Supporters' Clubs.

Closer to home, club staff and former players have made welfare calls to more than 3,000 elderly and disabled supporters during lockdown.

While Liverpool and Tottenham were forced to make an embarrassing U-turn over their decision to furlough staff in the face of a public backlash, United continued to pay their employees and encouraged them to volunteer for work helping the NHS.

It is understood that 140 have done so, including 80 who helped produce 60,000 meals in the kitchens at Old Trafford for NHS staff at hospitals in Manchester and Salford. They were given a crate of beer or cider from the unused stocks at the club as a thank you and told to give another to a key worker.

United also pledged to make goodwill payments to protect the income of 3,000 casual matchday staff affected by matches being cancelled or played behind closed doors — costing more than £1m.

United donated club medical supplies and protective equipment to the NHS when there were fears over a critical shortage.

The car parks at Old Trafford have been used as a coronavirus testing station and a fleet of 16 Manchester United Foundation vehicles and volunteer drivers were put at the disposal of the NHS to courier supplies across Manchester.

In addition to distributing meals to NHS staff, United also delivered hospitality gifts and merchandise to another 3,500 workers.

CARE IN THE COMMUNITY

The club's foundation has supported the community by giving £300,000 and 600 food parcels to support vulnerable children and families.

Not all the efforts involving United have been led by the club.

Captain Harry Maguire has been a key figure, along with Liverpool skipper Jordan Henderson, in the #PlayersTogether initiative to raise millions for the NHS. Maguire has also paid for food boxes to be delivered to the elderly and vulnerable people in the area of Sheffield where he grew up.

Rashford, meanwhile, has helped raise £20m to provide meals for children who were at risk of going hungry while schools were shut. While there have been no shortage of 'Covidiots', United players have been conspicuous by their absence from the list of Premier League players who have broken lockdown rules.

With the exception of a video of Marcos Rojo, currently on loan at Estudiantes, playing poker with friends 7,000 miles away in Buenos Aires (United say he has been reminded of his responsibilities), Solskjaer's squad have kept their noses clean.

United have helped out smaller clubs struggling through the pandemic by waiving £130,000 in loan fees due for three of their players - goalkeepers Kieran O'Hara and Joel Pereira, plus midfielder Ethan Hamilton.

It has given Burton Albion, Hearts and Bolton a break at a time when they are suffering financial hardship through the loss of matchday income.

The driving force behind United's response has come from the Glazers and, in particular, Woodward who has used video messages in recent months to rally staff.

They have also been encouraged to come up with suggestions of their own and the idea to turn off the lights illuminating the club's name at Old Trafford so it read 'NHS' came not from a slick PR executive but a member of the stadium staff.

As thoughts turn to Project Restart, United's squad has come out of lockdown in better shape. Rashford and Pogba have made use of the time to get fit and Ighalo's loan from Shanghai has been extended.

Woodward has described this as 'one of the most extraordinary and testing periods in the 142-year history of Manchester United'. The way they have risen to that challenge deserves great credit.