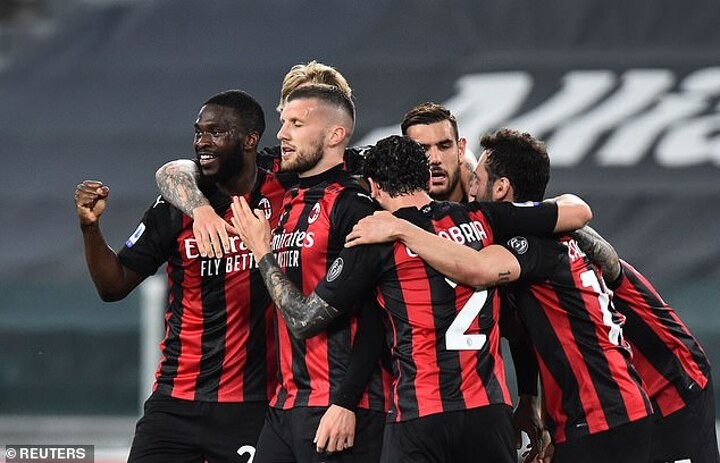 AC Milan are back in the big time and after clinching the £28.5million signing of Chelsea's Fikayo Tomori, Stefano Pioli's side mean business this summer.

The Rossoneri will return to the Champions League for the first time in seven years after clinching a second-placed finish in Serie A last term and the signing of the English centre-back marks their first major piece of transfer activity this summer.

Much better things were expected of Milan when they topped the Italian top-flight in February, before a mid-season collapse allowed city rivals Inter to romp to their first Scudetto in 11 years.

While the signing of Tomori is no real surprise given his excellent performances in the second-half of the season, his permanent move to the San Siro is the first sign that the club are seeking to close the gap on Inter in the window - who lost manager Antonio Conte due to financial uncertainties at the club last month.

The English centre-back is Milan's second summer signing of the window after completing a deal for Lille goalkeeper Mike Maignan - who is widely seen as a replacement for the Paris Saint-Germain-bound Gianluigi Donnarumma.

Tomori dazzled many during the second-half of the 2020-21 campaign for Milan, with his displays impressing the likes of legendary Italian centre-halves Franco Baresi and Paolo Maldini.

Maldini described the Englishman as a 'great talent' while three-time European Cup champion Baresi said: 'Tomori is imposing himself with talent and determination. He has shown no fear playing in a new league.

'He can potentially become a great champion. I hope he lives up to expectations.'

But Tomori is not the only loanee from last season that Milan want to tie down on permanent terms. By the end of the season, attacking midfielder Brahim Diaz became a vital player in Pioli's set-up, with reports claiming Milan are discussing another deal with the Spaniard's parent club Real Madrid.

Milan will be boosted by extra funds for Champions League football but could negotiate another loan deal to cut down costs. The LaLiga giants have become accustomed to favouring loan moves rather than sales in recent years in their dealings with Dani Ceballos, James Rodriguez, Sergi Reguilon and Luka Jovic.

The other player Milan are reportedly keen on signing permanently is Brescia's Sandro Tonali, who Milan spent £9million on a loan deal for with a £12million option to buy clause.

The young midfielder was a replacement for new Italy hero Manuel Locatelli, who jumped ship to Sassuolo in 2019, and made 37 excellent performances in the middle of the park.

Manchester United defender Diogo Dalot also spent last season on loan at the San Siro and is another transfer which should be completed by the end of the window.

Transfer time and resources will also be spent trying to improve the squad as well, with a central striker one of the positions where Pioli will look to strengthen in the market.

Milan struggled in the final third when Zlatan Ibrahimovic suffered several niggling injuries throughout the season, after the veteran striker propped the Rossoneri up at the top of the table with 11 goals in the first 10 games of the season.

Chelsea striker Olivier Giroud is a long-term target and Milan are reportedly confident in securing the Frenchman this summer.

The 34-year-old signed a new one-year deal with the Champions League winners this summer but Milan are reportedly prepared to offer him longer terms.

Another striker linked with a Milan move is Zenit St Petersburg forward Sardar Azmoun, who scored 19 goals for the Russian side last season to take the Iranian's league tally to 45 goals in 64 matches.

Gazzetto dello Sport say the 26-year-old's representatives are already in contact with Milan, with the forward set to challenge Ibrahimovic for a striker spot.

Milan will also have to make sure they keep hold of some of their key first-team stars who have been linked with moves away.

The future of Turkish midfielder Hakan Calhanoglu, who scored nine goals and registered 12 assists last season, is unclear with the 27-year-old admitting his next move will be decided after the European Championships.

Calhanoglu said before the tournament: 'I spoke to Paolo Maldini three days ago, he called me and we spoke about AC Milan.

'I wish to focus on Turkey...I have great respect for Ricky Massara (Milan's director of football) and Maldini and if something does come to pass, then I will talk to them.'

Left-back Theo Hernandez is another player who could be touted by bigger sides with PSG reportedly keen to bring him in following Juan Bernat's long-term knee injury.

The 23-year-old scored seven goals last season - an impressive total for a defender - but could be convinced to stay for another year due to the Champions League football on offer.