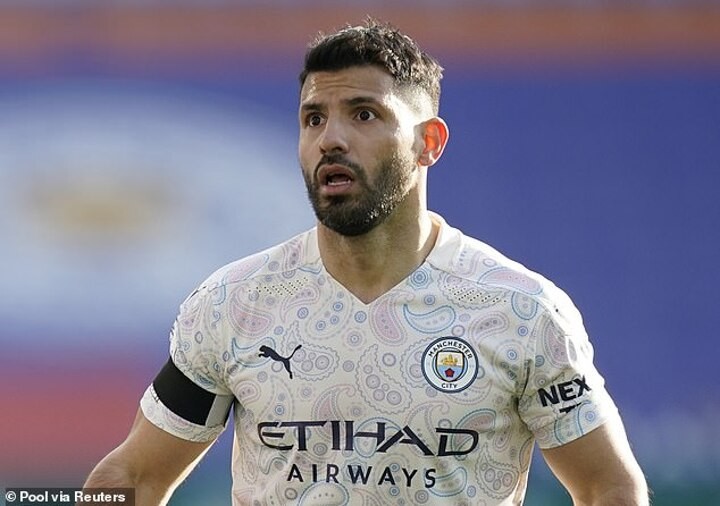 Champions League football is the pinnacle of most players career's, however, Sergio Aguero is willing to sacrifice European success to stay in the Premier League and prove himself away from Manchester City.

Having announced his decision to leave City after a decade with the club, attention turned to where the 32-year-old would move to next. With a host of European giants vying after his signature, Aguero was expected to agree terms with the likes of Real Madrid or PSG.

However, Aguero's quest to break more Premier League records is behind his desire to stay in England. The City legend believes he still has more to give in this country - despite having already broken former Newcastle United forward Alan Shearer's record of most hat-tricks in the Premier League.

With Aguero's dominance at City coming to an end, Sportsmail have rounded up the various ways in which the No 10 has re-written the Premier League history books so far and outlined the targets he made look to peruse.

Despite his success on English soil the Argentine is not quite ready to move on. He believes he can add to his Premier League goal tally and move up the league's all-time goalscorer list.

Alan Shearer's 260 strikes may be unattainable for Aguero, but a further two or three seasons in England could see him surpass Wayne Rooney's tally of 208.

When it comes to the greatest ever overseas player to grace the Premier League, there are a number of names that spring to mind.

The likes of Thierry Henry, Cristiano Ronaldo and Eric Cantona are just a few of the legendary figures who have not only competed in the top flight, but left a mark on English football.

However, it is Aguero who has cemented his place as the league's all-time top scoring foreign import - having found the net a total of 181 times.

Not only has Aguero topped the charts in terms of goals provided, he is also the most efficient striker the Premier League has ever seen.

The 32-year-old has the best minutes per goal record of any player who has featured in the English top-flight.

The No 10 averages a goal every 108.7 minutes, which is 13 minutes fewer than Gareth Southgate's key striker Harry Kane - who is in second place with a goal ratio of 121.4 minutes.

Most hat-tricks in Premier League history

Aguero has established himself as the greatest hat-trick scorer in the Premier League after overtaking Shearer in the rankings last year.

The Argentina forward equalled Shearer's mark with a brilliant hat-trick to take down Chelsea in February 2019.

However, it was January 12, 2020 when Aguero overtook the former record holder for the most hat-tricks in Premier League history.

Pep Guardiola had even joked that the Argentinian would 'die scoring goals' after City's 6-1 thrashing of Aston Villa in January.

Much like you or I, footballers enjoy their home comforts. Before the UK lockdown, 43.3 per cent of games ended in a home win, 21.9 per cent in a draw and 34.8 per cent in an away win.

The home advantage has been an ever present part of Premier League history and Aguero has made the most of such circumstances - scoring 104 of his 181 goals at the Etihad Stadium.

Aguero scored his 100th goal on home turf after converting a penalty in the club's 8-0 thrashing of Watford in 2020.

Aguero is topped only by Henry - who made Highbury his hunting ground, having scored 114 goals at the club.

Only two players have ever reached the 100 mark in a shorter time-scale than Aguero - who has scored more goals than any other player against the division's top six.

It is Shearer who once again tops the chart, becoming the first player to score 100 goals in just 124 appearances. The icon's record has remained untouched since.

Kane has come the closest to breaking the record, currently sitting second in the rankings - having reach the 100-mark after 141 goals.