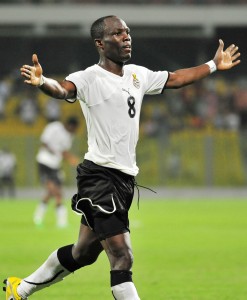 Man-of-the-Moment, Emmanuel Agyemang-Badu says he feels no pressure being the one to bail Ghana out when in dire need of a goal.

Twice, the Udinese midfielder has had to deliver the goods in a competitive fixture of the Black Stars and was done in grand style in both instances.

First was during last Juneâ€™s 3-1 win over Congo in the 2012 Afcon qualifier in Kumasi where his goal was very telling at a point the visitors had reduced the goal deficit to one and were on the rise.

His second came on Friday against lowly Swaziland at which point Ghana was leading by a solitary strike and the Accra crowd was getting agitated and frustrated by the profligacy of the forwards.

But lo and behold, the 21-year-old popped up with one of his trademark thunderbolts in the 79th minute to the relief of the expectant home fans.

However with his growing reputation and increasing expectation of him which has now made him the toast of Ghanaian football fans, Agyemang-Badu says he is just concentrated on playing his football.

â€œI feel no pressure at all, I only have to pray and concentrate so I can take this to the next level,â€ he exclusively told GHANAsoccernet.com.

â€œI think I can go far if I do extra training and continue to be disciplined so there is no pressure on me at all.â€

Watch the video of goal scored by Agyemang Badu