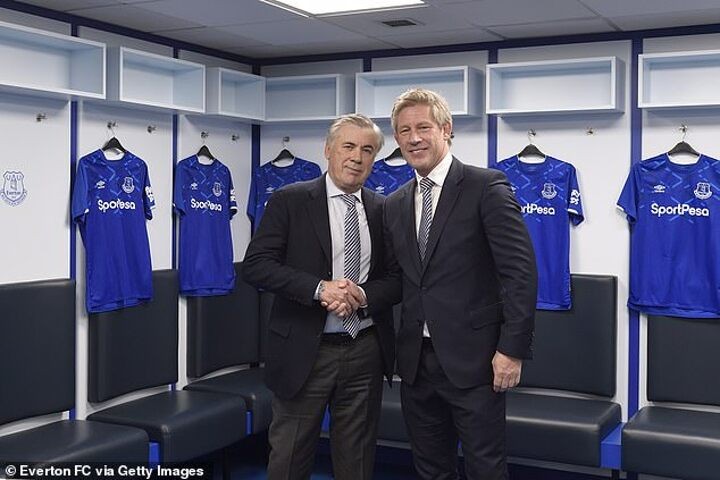 The 58-year-old Dutchman has not been offered an extension to a contract that expires next summer and has been told that any talks over a new deal will have to wait until after the January transfer window.

Brands’ fate is likely to hinge largely on his relationship with Everton manager Carlo Ancelotti, whose influence over transfers has grown during his year at the club.

And the Italian, who is under contract until 2024, gave Brands his backing yesterday. ‘We have a good relationship but apart from this friendship, he’s doing a fantastic job,’ Ancelotti said.

‘He has been here in the club longer than me. I found the club well-organised and a really important scouting department, so it would be important for him to continue and find a deal with the club.’

Brands is seen at Everton as having done a good recruitment job in his two years in the role, but he has been less successful at offloading some of the players Ancelotti is eager to move on.

That has left the club with a large wage-bill and slightly unbalanced squad.

David Sullivan is open to selling part of his stake in West Ham at a discount after failing to find a buyer willing to meet his £700million valuation.

The co-owner has let it be known he would accept around £100m for an initial sale of around 20 per cent to the right partner, with a view to selling all of his controlling interest of 51.5 per cent down the line.

Several American consortiums have expressed interest in West Ham, although they all remain a long way from matching Sullivan’s valuation.

Any deal is complicated by the contract covering West Ham’s move to the London Stadium four years ago, which includes a clause stating the Government are entitled to 20 per cent of any sale figure above £300m if there is an ownership change at the club before 2023.

The proposed takeover of Southampton has been delayed by their excellent form, with owner Gao Jisheng using the success of Ralph Hasenhuttl’s side in going top of the Premier League last month to raise the asking price.

As Sportsmail revealed in September, the Chinese businessman has entered into a period of exclusive negotiations with American businessman Joseph DaGrosa, who made it clear he was not willing to increase his offer on the basis of a handful of impressive results.

Gao remains eager to sell Saints, having taken out a £70m loan from MSD Capital to help with short-term financing issues last summer, although DaGrosa’s £200m bid is also reliant on borrowing.

Liverpool and Everton are in talks with the city council over introducing compulsory Covid-19 tests for fans who want to attend games at Anfield and Goodison Park over the next few months.

The city is continuing to operate a mass testing programme, despite preparing to enter Tier 2 after the national lockdown is lifted next week, and the council are considering making them mandatory for football fans.

Liverpool are preparing to welcome 2,000 supporters to Anfield when Wolves visit a week tomorrow, with Everton’s first home game since the end of the national restrictions coming against Chelsea the following weekend, and both clubs will learn what protocols must be put in place at a meeting with the council this week.

Anfield has been used as a testing centre for the last month, so putting on match-day tests for 2,000 fans should prove straightforward.

The Premier League are not planning to make Covid testing mandatory for the 10 clubs who are permitted to host crowds, although fans will have their temperature taken on arrival and be asked to complete a health questionnaire before leaving home.