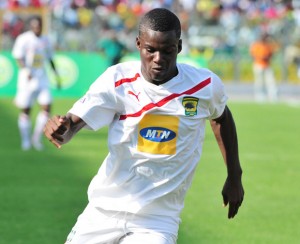 Asante Kotoko striker Ahmed Toure is insisting he passed his medical at Al Masry and is on his way to joining the Port Said-based side.

The 24-year-old Ivorian international was reported to have failed his medical which denied him to sign a three-year deal reported to be worth U$ 400,000.

Toure, who has netted six times this term, has squashed the reports saying what is left is negotiations between Kotoko and the Egyptian Premier League side.

"The team I went to do the medicals in Egypt, everything went well. Now I'm waiting for the chairman to finish everything. It is one important thing for me," he told Accra-based Pravda FM 93.5

"Every player wants to play in a great country and Egypt is one of them. They have some great footballers there." he added.

Kotoko have released a statement denying the striker failed the medical as speculated by the local media.