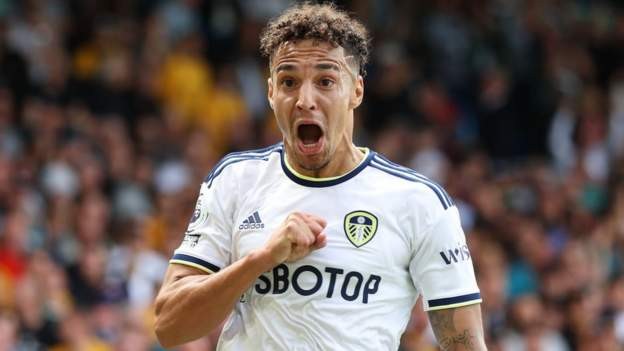 For the third game in a row, Leeds avoided defeat by Wolves after falling behind

Leeds United's soft reboot under manager Jesse Marsch got off to a winning start as Rayan Ait-Nouri's own goal gave them a comeback victory over Wolves in a lively game at Elland Road.

It has been a summer of change for the Whites, leading to Marsch fielding four debutants on Saturday as part of a remodelled side looking to produce the effective pressing and direct play the American favours.

They were dealt an early blow when Daniel Podence's bouncing effort found its way over goalkeeper Illan Meslier to give Wolves a sixth-minute lead.

But the home side rallied and levelled through Rodrigo's low, angled drive midway through a first half in which they were roared on by a hostile home crowd.

Despite a depleted attack lacking the injured Raul Jimenez, Wolves came out swinging in the second half and set home nerves jangling by threatening a winner of their own.

But instead Leeds struck, with Ait-Nouri poking Patrick Bamford's superb low cross into his own net from close range under pressure from excellent debutant Brenden Aaronson.

Display upon which Leeds can build

Having helped rescue Leeds from relegation last season over 12 high-pressure games in which performances were secondary to points, Marsch is now under the managerial microscope.

The dozen matches he oversaw to conclude 2021-22, culminating in a dramatic last-game escape at Brentford, veered from bland to ridiculous, often within a single game. Little could be ascertained about Marsch's style or vision amid the madness.

Having had a summer to revamp the squad and start to mould them to his taste, he must now be a man with a visible plan - and there was certainly that inside a lively and expectant Elland Road.

Tyler Adams and Marc Roca kept it largely simple in the midfield berth left by Kalvin Phillips, Rasmus Kristensen provided all-action width from full-back and Patrick Bamford returned to give glimpses of why he was on the fringe of the England squad before injury struck last season.

The standout performer was Aaronson, though, who was a constant source of energy and endeavour during his time on the pitch.

He lacks the outright flair of Raphinha - the man he was brought in to help replace - but in his own industrious way could prove as effective.

As Marsch pointed out before the game, the team may have lost two stars, but in general is stronger.

It was far from a perfect opening display, with chances going begging at one end - Bamford should have made the conclusion more comfortable with a header Jose Sa clawed away - and a prolonged period at the start of the second half when they couldn't get a foot on the ball.

But it is a positive start and something upon which Marsch and his new-look team can build.

Tyler Adams (Leeds United) is shown the yellow card for a bad foul.

Maximilian Kilman (Wolverhampton Wanderers) wins a free kick in the defensive half.

Jonny (Wolverhampton Wanderers) wins a free kick in the defensive half.

Attempt missed. Sam Greenwood (Leeds United) right footed shot from outside the box is too high from a direct free kick.

Jack Harrison (Leeds United) wins a free kick in the attacking half.

Rayan Aït-Nouri (Wolverhampton Wanderers) wins a free kick in the defensive half.