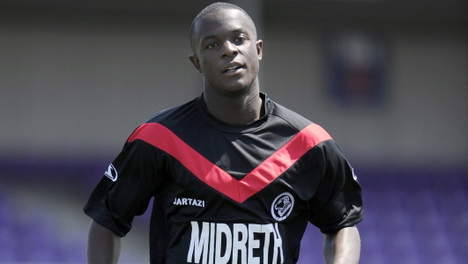 Dutch giants Ajax Amsterdam have sacked their Ghanaian player Rene Osei Kofi after threatening his team-mate with a gun, Ghanasoccernet.com can exclusively.

The 18-year-old midfielder, who is on loan at second tier Dutch club Almere City, put the gun to the head of Christian Ghandu and threatened to blow his head off in a furious tirade.

Terrified team-mates quietly intervened before the sweating Ghandu was set free from the imminent danger.

The two players had been involved in verbal exchanges after a training ground row which resulted in another bust-up at the clubâ€™s car park.

Osei Kofi returned from his car with a gun and pointed it to the head of his team-mate Ghandu.

''We received a report from Almere who verified that the incident occurred and this is the reason why we have processed his dismissal,''said Miel Brinkhuis, spokesman for Ajax.

Decks Lenno, spokesman for the Almere City said: "There was something bad for us that was sufficient reason to cancel the loan agreement.â€

It is not known if Osei Kofi will contest his sacking.

Ghandu has not reported the matter to the police.

Osei Kofi joined the Ajax Youth Academy in 2007 and signed a three-year professional contract with the club in 2008.

Under a partnership agreement between Ajax and Almere City, the former World Omni, was loaned to the first division club to gain more playing time.

He made his debut for Almere City on 13 August in the home game against RBC Roosendaal.