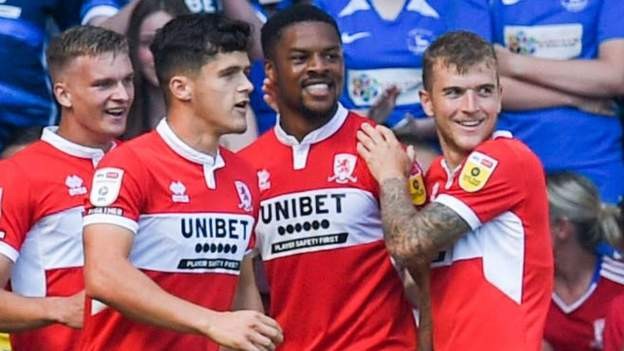 Chuba Akpom watched his header go in for his, and Boro's, second goal

Chuba Akpom's double saw Middlesbrough twice fight back to claim a point in an entertaining Championship match with Sheffield United.

The away side took an early lead when Sander Berge's low strike from 18 yards beat Zack Steffen in the Boro goal.

Akpom levelled with a close-range finish from Isaiah Jones' cross for his first goal for the club since April 2021.

Ryan Giles slashed Iliman Ndiaye's drilled centre into his own net but Akpom headed home to rescue a point for Chris Wilder's hosts.

The draw means Boro, who saw sub Duncan Watmore hit a post late on as they looked for a winner, remain without a victory this season.

In hot conditions it was credit to both sets of players that the pace of this early season encounter hardly dropped across the 90 minutes, with both teams searching for a third goal right up until the end.

Home goalkeeper Steffen will perhaps think he should have done better with Berge's opening goal for the Blades, as his low shot seemed to go through the USA international.

Akpom quickly levelled for the home side with a tidy finish, and it was they who then enjoyed the better of things for the rest of the half.

Sub Rhian Brewster had a great chance to put the Blades back in front straight after his introduction at the break, but could not find the net after rounding Steffen.

The away side then retook the lead in highly fortuitous circumstances as home full-back Giles clattered the ball into his own goal when he could have simply allowed Ndiaye's cross to go by him.

Former Blades boss Wilder will have been pleased with how his men responded to that setback though as Akpom, who spent last season on loan in Greece with PAOK Salonika, popped up to head home from close in after a corner was headed back across goal.

Boro will look to claim their first three points of the campaign at Stoke in midweek, with Paul Heckingbottom's men also in action on Wednesday as they host unbeaten Sunderland.

Attempt saved. Darragh Lenihan (Middlesbrough) header from the right side of the six yard box is saved in the top centre of the goal. Assisted by Jonny Howson with a cross.

John Fleck (Sheffield United) is shown the yellow card for a bad foul.

Patrick McNair (Middlesbrough) wins a free kick in the defensive half.

Darragh Lenihan (Middlesbrough) wins a free kick in the defensive half.

Duncan Watmore (Middlesbrough) hits the left post with a right footed shot from very close range. Assisted by Ryan Giles with a cross.

Rhian Brewster (Sheffield United) wins a free kick in the defensive half.

Goal! Middlesbrough 2, Sheffield United 2. Chuba Akpom (Middlesbrough) header from the centre of the box to the bottom right corner. Assisted by Darragh Lenihan with a headed pass following a corner.