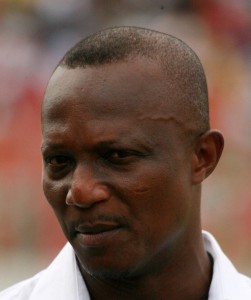 Ghana's U-23 team, The Black Meteors will revert to the hands of the Ghana Football Association, head coach Akwasi Appiah has confirmed.

The ex Ghana international took over from David Duncan on an interim basis with the brief of qualifying the side to the All Africa Games against Nigeria.

This target was achieved with a 2-0 win over the Dream Team V on Sunday which pulled both sides even on a 3-3 aggregate but the Ghanaians qualify on the away goals rule.

Now that his express task is done, Appiah will return to his substantive job as the assistant coach of the Black Stars but could yet be handed the U-23 post on a permanent basis.

"I will now hand over the team to the GFA since I have completed the task given me," he told Accra-based Hot FM.

"It will be then up to the officials to determine who becomes the substantive coach, I have no hand in that."

The soft-spoken coach was appointed at a time when the side wasn't doing well under David Duncan.

The team had suffered elimination from qualification to the 2012 London Olympic Games by Sudan which left many Ghanaians angry and disappointed.