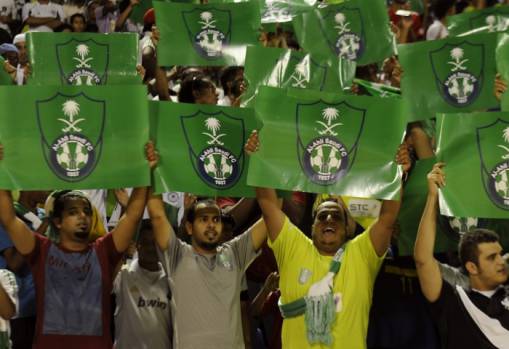 Jeddah: Al Ahli were crowned champions of Saudi Arabia for a third time after sealing the Professional League title with a 3-1 win over rivals Al Hilal at the King Abdullah Sports City on Sunday.

It was the visitors who got off to the best possible start with Carlos Eduardo putting them ahead after ten minutes, when he got in between two defenders to meet a high ball and send a looping header past Yasser Al Moisalem.

However, Al Ahli responded immediately after the break as Omar Al Soma found space on the edge of the box after the ball fortuitously broke to him, and instinctively sent a clinical left-footed strike into the bottom corner.

The Syria international struck again in the 50th minute when he ghosted in at the far post unmarked and stabbed his shot over the line from a yard out, after Motaz Hawsawi had flicked a corner into his path.

And deep into injury-time, the win was wrapped up when a sweeping counterattack saw Giannis Fetfatzidis break free inside the box and although his cross-shot was parried by Khalid Sharhili, Housain Al Mogahwi was on hand to lash home the rebound.

Although Al Hilal can mathematically still finish level on points with the new champions, they would still lose out due to their inferior head-to-head record, having lost their first meeting of the season 2-1 back in December before Sunday’s defeat.

Both teams are also challenging for the AFC Champions League with Al Hilal currently second in Group C and finishing off their campaign against Iran’s Tractorsazi Tabriz on May 3, while Ah Ahli are third in Group D and need a result against Qatar’s El Jaish on the same day to have any chance of making the knockout round.