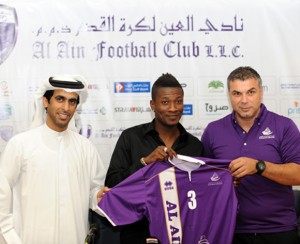 United Arab Emirates giants Al Ain say they are keen on signing Asamoah Gyan on a permanent contract when his loan deal expires next year.

Gyan moved from English side Sunderland on a one-year loan deal on Saturday.

The Black Cats chairman Naill Quinn says will welcome the Ghanaian striker back to the club when his loan deal expires at the end of next season.

But Al Ain director Awad Bin Hasoum Al Darmaki says they are keen on negotiating a deal for Gyan to stay with the club at the end of his loan stint.

"Al Ainâ€™s priority is the extension of the loan deal or outright purchase of the player at the end of the season," Al Darmaki said.

Gyan will have two years remaining on his contract with Sunderland when his loan deal with Al Ain expires.

He had been linked with several top clubs in Europe before Al Ain swooped for the deal.