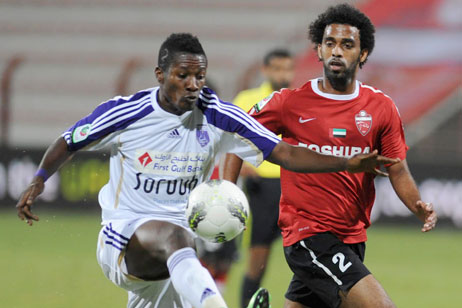 Al Ain will have to make do without star striker Asamoah Gyan for two important games later this month after he was called up by Ghana for their 2013 Africa Cup of Nations clash against Malawi.

Gyan, who ended his self-imposed international exile earlier this year, has been named in Kwesi Appiahâ€™s 21-man squad for their return fixture against Malawi in Lilongwe on October 13.

Appiah is taking no chances as the Black Stars seek to qualify for next yearâ€™s finals in South Africa after winning the first leg 2-0 at home last month.

His absence is likely to pave the way for Al Ain new boy Alex Brosque to take his place after the Australian striker completed his move to the club on a two-year deal last week.

Both men are expected to line-up together for the first time this weekend when Al Ain will look to build on their 4-1 thrashing of Ajman last time out against newly-promoted Al Dhafra.