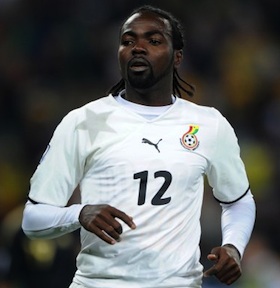 Ghana striker Prince Tagoe could be handed an escape route by either Al Shabab or Ettifag, reports have claimed.

Tagoe has struggled for playing time since he joined Bursaspor from German side TSG Hoffeheim after excelling on loan at Serbian giants Partizan Belgrade.

The Ghanaian is believed to be unsettled at the club and want a move away to a club who can guarantee him first team action.

But Bursaspor will only allow him to join another club who can meet his buy-out valuation.

The 25-year-old played for United Arab Emirates side Ettifag and officials of the club are believed to be interested in luring him away from the European outfit.

Al Shabab also want to give the Ghanaian an escape route by offering him the chance to re-unite with his former club.