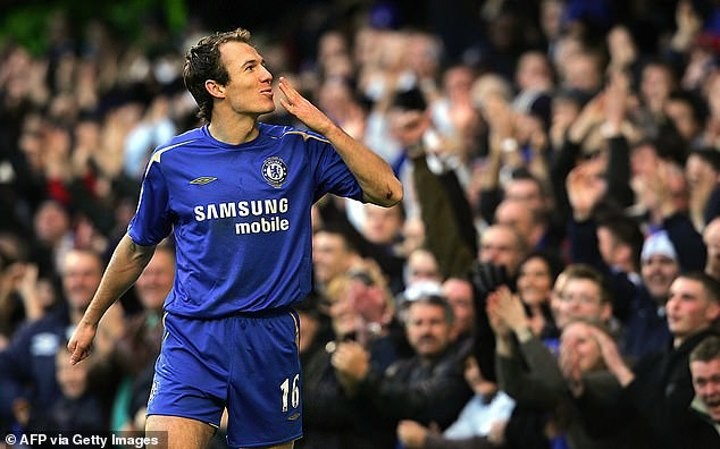 Rio Ferdinand evoked memories of when Arjen Robben rejected Manchester United to join Chelsea despite being shown around the club's training ground.

The Dutch winger was among a host of players who spurned the chance to join the Red Devils even during Sir Alex Ferguson's successful reign at the club.

Ferdinand said of Robben: 'What a player. Robben was great. We should have signed him at Man United.

'I think he came to the training ground. He walked around and didn't like the smell and walked off and went Chelsea. I couldn't believe it man. He would have been great for us.'

Robben went on to win two Premier League titles under Jose Mourinho at Chelsea before sealing a move to Real Madrid in 2007.

Here, we take a look at who else has got away from Manchester United in the modern era.

Ferguson has confessed that missing out on Gascoigne in 1988 is the biggest regret of his career, while Gazza adds his own tragedy to the tale by admitting it as his too.

Gascoigne was 21 and identified as one of the greatest talents of his generation.

Ferguson recalled: 'We spoke to him the night before I went on holiday. He says "Go and enjoy yourself Mr Ferguson, I'll be signing for Manchester United".

'So I went on my holidays but Martin Edwards (then chairman) rang and said "I've got some bad news - he signed for Tottenham. They bought a house for his mother and father in the north east and that swung it".

'I think it was a bad mistake, and Paul admits it.'

It's rare that Ferguson misses out on spotting an exciting talent and even rarer for a player to snub a move to Old Trafford.

So when Shearer blanked Ferguson not once but twice, the United boss was left fuming after his league rivals picked up the pieces.

Ambitious Blackburn were first to pip Fergie in 1992 when they paid a British record £3.6million to Southampton for the striker after achieving promotion to the Premier League.

By the time Rovers were on the decline in 1996, the vultures circled before Fergie was trumped again, this time by Shearer's boyhood club Newcastle who paid a world record £15m.

You can't win them all.

Sir Alex Ferguson signed Portugal's Ronaldo in 2003 but he could have landed the Brazilian one years before.

Manchester United tried to entice Ronaldo to England but were unable to secure a work permit for the clinical marksman.

Ferguson wrote in his book Leading: 'We wanted to sign the Brazilian striker from Cruzeiro in 1994, but we could not get a work permit and he went to PSV Eindhoven in the Netherlands.'

Ronaldo went on to score goals for fun in Holland, Italy and Spain.

Following the sale of David Beckham, Ferguson had money to burn in 2003 and was hot on the case of Paris Saint-Germain's Brazilian star to headline his summer signings.

United were favourites to land the forward, with PSG officials going as far as saying they were '99.9 per cent sure he would leave for Manchester'.

But with chief executive Peter Kenyon in charge of securing the deal, United somehow lost out in a bidding war to Barcelona, who themselves had earlier in the summer failed in a bid to sign Beckham.

Ferguson was less than pleased to put it mildly and could only watch as the buck-toothed Brazilian went on to win World Player of the Year twice while at the Catalan Giants.

They did end up with a certain Cristiano Ronaldo instead though...

Oh how one of the most memorable moments in Manchester City's history could have been a lot different.

The 'Agueroooooooo' drama on the final day of the 2011-12 season would have never happened if Ferguson got his way years before.

Ferguson wrote in his book: 'We had a chance to buy Sergio Aguero before he went to Manchester City, but eventually his agent was demanding a price we were not prepared to pay.'

Aaron Ramsey is being linked with a summer move to Manchester United if Paul Pogba seals a return to Juventus, but the Welshman has previously rejected the Red Devils.

Manchester United thought they had their man with the club even announcing on their website that they had agreed a deal with Cardiff for Ramsey.

The then 17-year-old was convinced to reject United by Arsene Wenger, who held one-on-one talks with Ramsey during Euro 2008.

Ramsey went on to win three FA Cups at the Gunners before ending his 11-year stay last summer.

Ferguson tried his best to sign France's Raphael Varane back in 2011 but was beaten to his signature by Real Madrid.

The Scotsman said of his failed pursuit: 'In 2011, I hurtled down on the train from Euston to Lille to sign the young French defender Raphael Varane. David Gill was getting into the finer points of the contract with Lens, Varane's club, when Zinedine Zidane got wind of this and somehow scooped him up for Real Madrid from under our noses.

'I don't think Jose Mourinho, who was managing Real Madrid, had even seen Varane play.'

Varane's talent has seen him transform from a talented teenager into one of the best centre backs in world football.

David Moyes and Louis van Gaal both wanted to sign Cesc Fabregas during their time at Manchester United but were unable to get the deal over the line.

Fabregas did end up returning to the Premier League in the summer of 2014 but he decided to join Chelsea rather than United.

He recently said of United's interest: 'After the week I had to take my chance, I had Manchester City, United and then I spoke to Mourinho - which I didn't think would ever happen.

'To be honest, after I left the room with Mourinho I said, "That's it, I don't need to talk to anyone else, I'm going to Chelsea". What he told me, the team he wanted to make, what he thought of me, how he wanted me to play, this is what I wanted.

'On top of that it's London not Manchester, London was my home.'

Toni Kroos recently revealed just how close he came to becoming a Manchester United player back in 2014.

The Germany international was on the cusp of agreeing to an Old Trafford move when the club sacked manager David Moyes.

And Kroos insists that had the Scotsman stayed, he would have been a United player, with Louis van Gaal going cold on a deal when he took over at the club.

'David Moyes had come to see me and the contract had basically been done but then Moyes was fired and Louis van Gaal came in, which complicated matters. Louis wanted time to build his own project,' Kroos explained to The Athletic.

'I didn't hear anything from United for a while and started having doubts.

'Then the World Cup started and [then Real Madrid boss] Carlo Ancelotti called. And that was it.'

Many thought Haaland was joining Manchester United in January but the Norwegian had other ideas.

However, he ended up spurning United with the towering 19-year-old choosing to join Borussia Dortmund instead.

Agent Mino Raiola was said to be a factor but United knew he advised Haaland before they entered the race.

He has made a formidable start to life in Germany with the £18m signing scoring 12 goals in 11 games since his January move.