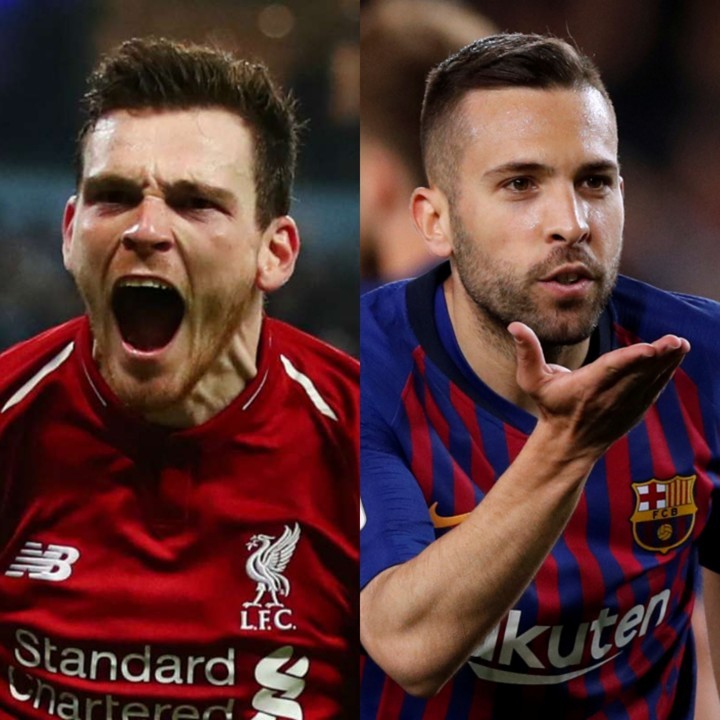 The full-back is becoming an ever-more important aspect of the game – check out our picks for the top left-backs on planet Earth right now...

Alphonso Davies may only be 19-years-old, he may not even be a natural left-back and he may have only been drafted into the position because a defensive crisis at Bayern Munich has shoehorned David Alaba into the centre - but he’s already proving himself as one of the best full-backs in Europe.

Davies is an excellent crosser of the ball and gets up to support play when Bayern attack, such are his natural instincts. His lightning speed, however, means that what he lacks in positional sense he more than makes up for in his ability to get back in time.

After starring in the Bundesliga this season and putting in an excellent display against Chelsea in the Champions League, people are starting to sit up and take note of the young Canadian.

Leicester City have had an outstanding season, with two of the highlights being Ricardo Pereira at right-back and Ben Chilwell on the opposite flank.

Chilwell, in particular, has drawn a lot of attention from some of the traditional big boys of the Premier League, with the likes of Manchester City apparently interested in his signature.

Chilwell isn’t just good going forward, Harvey Barnes has been helped hugely by having an overlap from Chilwell this season. The 23-year-old is an excellent defender too; he’s superb in transition, and along with Caglar Soyuncu and Jonny Evans, has formed one of the most formidable back fours in the Premier League.

With the likes of Alex Grimaldo, Ricardo Pereira, and Joao Cancelo available, Portugal have a rich choice when it comes to full-backs. French-born Raphael Guerreiro is another solid option on the left-hand side of the defence, and has been in excellent form for Borussia Dortmund this season.

Guerreiro has been deployed as a midfielder for a lot of his time at Signal Iduna Park, but now 26, he’s found a home for himself at left-back under Lucien Favre.

He’s a confident passer of the ball, supports attacks well and has excellent stamina. Guerreiro is one of the most reliable members of the Dortmund side and just approaching his peak.

Another left-back who enjoyed a spell in Germany, Juan Bernat was signed by Pep Guardiola at Bayern Munich from Valencia. Now at Paris Saint-Germain with Thomas Tuchel, the Spaniard has ousted Layvan Kurzawa from first-choice contention and secured a regular spot in the side.

A converted left-winger, Bernat still has the instinct to get forward whenever he can to support the likes of Neymar and Kylian Mbappe at PSG.

Having worked with Guardiola during a phase of his career where he began experimenting with full-backs a little more - the Catalan boss would frequently use Philipp Lahm in midfield and started inverting his full-backs to push midfielders forward - Bernat has picked up a more rounded understanding of the game.

Tuchel’s game relies on intelligent players who can play a variety of systems and Bernat is one such player who is capable of excelling in a multitude of situations.

He’s played in midfield, he’s been a full-on holding midfielder, and given Bayern’s recent treatment table pile-up, he’s slotted into central defence alongside Jerome Boateng. But everyone knows David Alaba as a left-back, and he’s still one of the best in the world.

Alaba’s positional sense, vision and ability to break up attacks are the envy of many midfielders, let alone left-backs.

The Austrian has been one of the most consistent footballers in the Bundesliga for years now and is perennially linked with moves to the likes of Arsenal, Barcelona and Chelsea. He may be a centre-back for now, but he’s still a world-class left-back to everyone.

Marcelo was key to Real Madrid’s “threepeat”. Los Blancos were able to pack the midfield in big games in the Champions League, with the Brazilian left-back marauding forward to support the attack with pinpoint balls into the middle and one of the most sumptuous first touches that football has ever seen.

The 31-year-old may be showing signs of slowing down now but he’s still a force of nature in the Real Madrid side. Marcelo has one of the best engines in the game and still offers Real another attacking option when they’re in possession. He’s arguably the greatest in his position ever.

From one Real Madrid left-back to another, Marcelo’s replacement, Ferland Mendy, has made waves since joining the Bernabeu last summer from Lyon.

Mendy is a proficient defender, is pacy and has proven himself to offer a useful overlap for Madrid. The 24-year-old is still learning his trade at Real too; he’s a good few years off his peak and already one of the bright sparks of the season.

With Eden Hazard ahead of him too, Mendy will be looking to form a solid partnership down Real's left flank when the Belgian comes back from injury.

Maurizio Sarri likes his full-backs to get high up the pitch and support the attack, while the centre-backs play out from the back and move the ball vertically. The Juventus boss has arguably never had a left-back as competent as Alex Sandro, either.

Sandro is a great defender, excellent in transition and a useful option on the left wing. He combines well with the likes of Cristiano Ronaldo in the Juve team and on the occasion that Aaron Ramsey comes into the side - and Sarri opts to reshuffle into a 4-3-1-2, with the Welshman as a trequartista behind a front two - The Old Lady rely on Sandro for his width in the side.

The Brazilian has been one of the most coveted defenders in Serie A for years now, and with another good season under his belt, Juventus will face another battle to hold onto him when the transfer window reopens.

Left-back was an issue not long ago for Jurgen Klopp, who spent a season using James Milner as a makeshift defender.

Since Liverpool signed Andrew Robertson though, the back four has become the strength of the team with both the Scot and Trent Alexander-Arnold on the opposite flank not only proving themselves to be competent defenders but becoming huge sources of creativity in the side.

Robertson - the better defender of the two - has established himself as his country’s captain and the best left-back in the league in just two and a half seasons at Liverpool. The 26-year-old registered 11 assists in the Premier League last season, as the Reds racked up 95 points.

Jordi Alba began his career at Barcelona’s famed La Masia academy but was released during his youth. After showing Barca what they were missing while at Valencia though, Alba went back to Camp Nou in 2012 - and hasn’t looked back since.

In a team consisting of Lionel Messi, Frenkie De Jong and Antoine Griezmann, Alba isn’t the flashiest star on the team sheet, but his consistency over the past eight years has been astonishing, with Barcelona not really having a back-up for him last season.

Alba has established himself as a formidable defender and an option in the final third that most clubs would take further forward, too; proving himself to be the complete full-back for club and country.