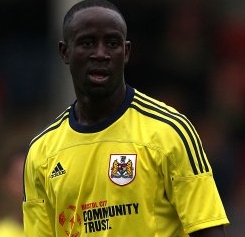 Ghana new boy Albert Adomah has boosted his confidence ahead of next week's double assignments against Swaziland and Brazil by scoring for his club on Saturday.

Adoma scored the opener on the stroke of half-time for Bristol City in a 1-1 draw with Doncaster Rovers in the English Npower Championship.

The 24-year-old maneuvered his way into space in the penalty area before blasting home the opener for the Robins and grabbed his first goal of the 2011/12 campaign.

Doncaster's James Hayter atoned for his earlier miss by levelling the scoring after 63rd minutes.

Adoma has been named in Ghana's 23-man squad to play Swaziland on 2 September in Accra in a 2012 Africa Cup of Nations qualifier.

The Black Stars will then face Brazil three days later at Craven Cottage in an international friendly.