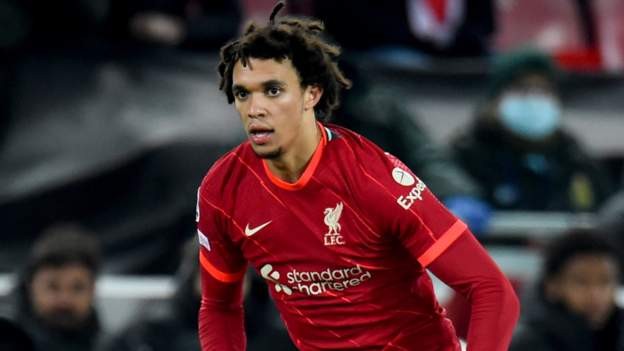 Liverpool's Trent Alexander-Arnold will be out for several weeks with a hamstring problem, manager Jurgen Klopp has confirmed.

The England defender, 23, suffered the injury during Wednesday's Premier League win at Arsenal.

It means he will also miss England's friendlies against Switzerland and Ivory Coast next week.

"Trent is out with a hamstring, so he cannot be part of England too," said Klopp.

"Not good news, we will see how long that takes."

Joe Gomez and veteran James Milner are the likely candidates to replace Alexander-Arnold, but Klopp admits neither possess the same skillset as the England international.

"Of course to replace Trent is difficult but possible," added Klopp, whose side travel to Nottingham Forest in the FA Cup quarter-final on Sunday.

"I don't know any player who plays like Trent, so its difficult to find a one-to-one replacement.

"We have Milly [Milner], Joe, theoretically we can change the system as well, these kind of things. So we have a couple of options.

"When you look in the past when Milly has had to step up he has done incredibly well. And if not maybe we have a young solution."

Klopp's side host Watford in their first Premier League game back after the international break on 2 April, before a pivotal trip to title rivals Manchester City the following week, either side of the first leg of the Champions League quarter-final.

The Merseysiders are currently second in the Premier League, one point behind City.