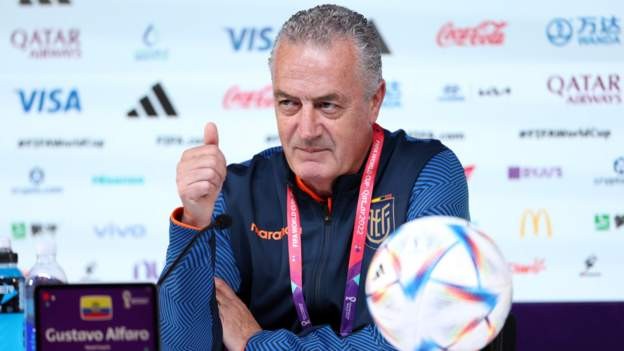 Gustavo Alfaro wants his Ecuador side to make it the "best World Cup in Ecuadorean history" as they chase a place in the last 16.

Ecuador will qualify for the next round if they avoid defeat against Senegal on Tuesday (15:00 GMT).

Alfaro's side are second in Group A after beating Qatar and drawing against group leaders the Netherlands.

Should Ecuador progress, they will match their all-time best World Cup showing when they reached the last 16 at Germany 2006, where they were knocked out by England.

But they take on a Senegal side 26 places above them in the world rankings.

"We respect the pecking order, but we don't need to be fearful. We remain calm but that doesn't mean we are over-confident - we are not triumphalist," added Alfaro.

"We are not just thinking of getting a draw. We want to progress, we want to seal our passage, we want to play the best World Cup in Ecuadorean history."

Senegal, third in Group A with three points from their first two games, will be eliminated if they lose, and will likely need a victory to progress, unless hosts Qatar beat the Netherlands.

Coach Aliou Cisse has urged his players "not to overthink" the game and keep "cool heads".

"We are OK, we are dealing with pressure and stress. For me it is good stress," he added.

Ecuador are hopeful captain Enner Valencia, who has scored all three of their goals at this World Cup, will play at least some part in the game despite being forced off against the Netherlands with a knee injury.

Senegal have no new injury concerns.

This is Ecuador's first World Cup match against an African nation. Opponents Senegal are winless in both of their previous World Cup games against South American sides, with both of these coming in the final group game of a tournament (3-3 against Uruguay in 2002, 0-1 against Colombia in 2018).If they avoid defeat, Ecuador will qualify for the knockout stages of the World Cup for the second time in their history, also doing so in 2006. It would also be the first time they've gone through an entire group stage unbeaten.Enner Valencia has scored six World Cup goals for Ecuador, twice as many as any other player (Agustin Delgado has three). He's scored those six goals from just nine shots on target.Valencia has also scored each of Ecuador's past six goals at the World Cup, the first player to do so for a single nation since Oleg Salenko for Russia in 1994. He could become the first player in World Cup history to score seven goals in a row for a nation.