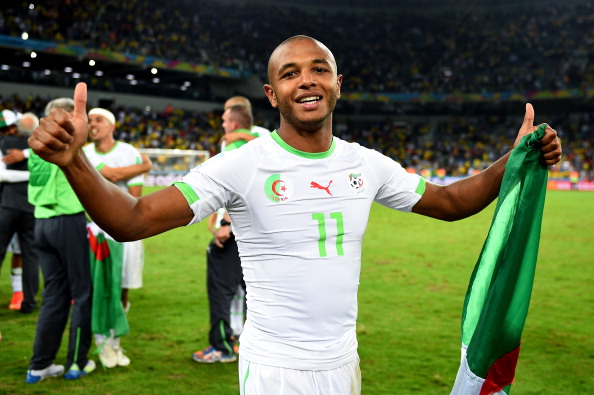 CURITIBA, BRAZIL - JUNE 26: Yacine Brahimi of Algeria celebrates qualifying for the knock out stage after the 1-1 draw in the 2014 FIFA World Cup Brazil Group H match between Algeria and Russia at Arena da Baixada on June 26, 2014 in Curitiba, Brazil. (Photo by Shaun Botterill - FIFA/FIFA via Getty Images)

Brahimi shrugged off competition from likes of Ivorian star and former holder Yaya Toure, Gervinho Pierre-Emerick Aubameyang and Enyeama to become the first ever Algerian player to be so honoured in the continent.

Many had thought that Enyeama who has been a phenomenal figure in-between the sticks for the Super Eagles and was key to Nigeria making it to the round of 16 of the last world cup staged in Brazil will nick the top prize.

If he had won, Enyeama would have been the second Nigeria after Jay jay Okocha to win the BBC award.

Many will now hope to see Enyeama scoop the ultimate which is the CAF African footballer of the year award which he is amongst the final five shortlist for the award.