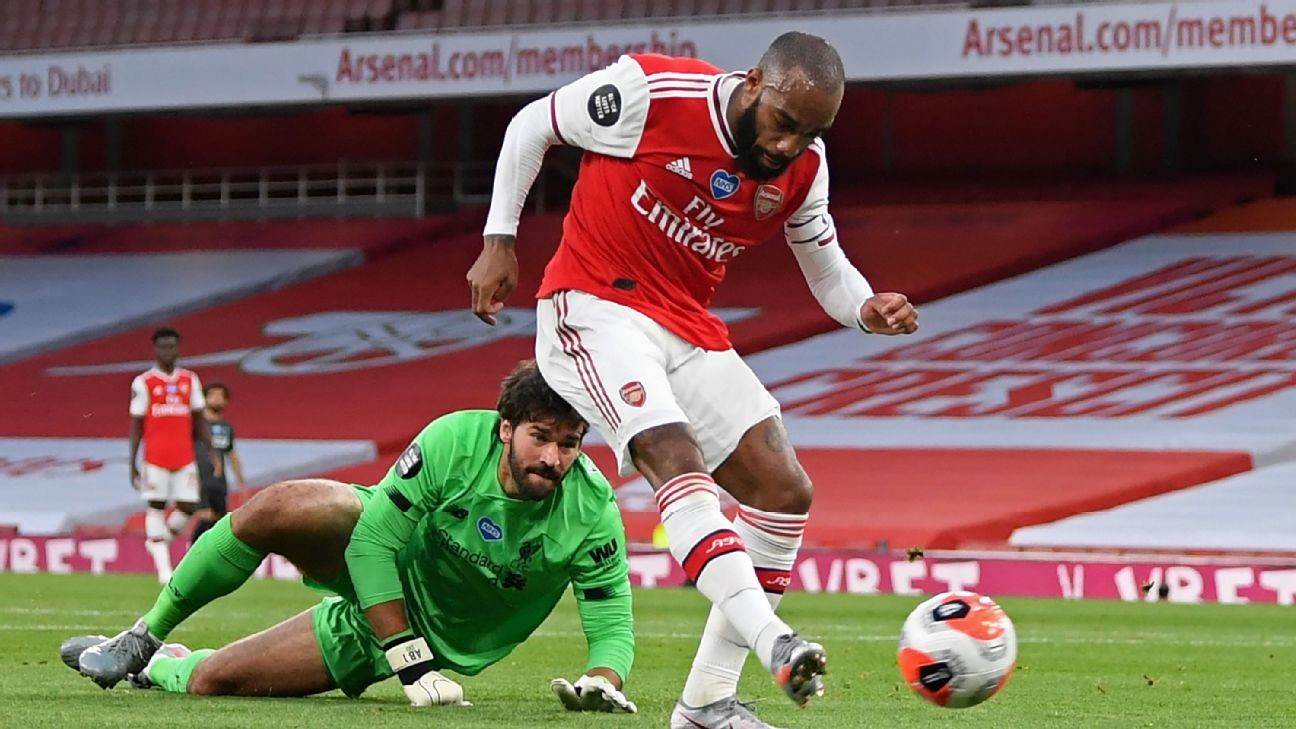 Former professionals have stated that it can be difficult for teams to maintain complete focus when they've already won the league. If anyone needs evidence of that, then they only need to look at Liverpool's performance in a 2-1 defeat to Arsenal.

Sadio Mane put them ahead, before mistakes from Virgil van Dijk and Alisson allowed Alexandre Lacazette and Reiss Nelson to turn it around before half-time.

Jurgen Klopp's team came out with more fight after the break, but were unable to break Arsenal down. The defeat saw Jurgen Klopp's side lose for just the third time this season but the second time since clinching the title.

There were large periods where Liverpool pressed really well, not allowing Arsenal to get into their passing flow or create chances. They were dominant before the opener, while there were also massive improvements after half-time -- especially when Takumi Minamino came off the bench.

Some of Liverpool's passing was far too sloppy for their standards, with the mistakes for Arsenal's two goals being the most obvious examples. It is, perhaps, understandable because the league title is already in their clutches, but there were plenty of lapses of concentration.

Defeat also signalled the end of the quest for 100 points, as the best Liverpool can do now is 99.

7 -- Klopp's face after Arsenal's second goal said it all. There is no way he could have solicited for Van Dijk and Alisson -- who are usually so reliable -- making mistakes. The German has a difficult task keeping his players going until the end of the season. His decision to bring Minamino on for Roberto Firmino did elevate the team's play, even if it wasn't enough to earn a point.

GK Alisson, 4 -- Looked uncharacteristically uncomfortable on the ball, giving it away for Arsenal's second in calamitous fashion. Didn't have too much else to do aside from picking the ball out of his net.

DF Trent Alexander-Arnold, 6 -- He looked nonchalant at times, but showed plenty of quality with the ball at his feet. Was booked for a poor challenge on Bukayo Saka.

DF Joe Gomez, 8 -- There will be questions asked about Liverpool's defensive mistakes, but Gomez shouldn't be criticised. He showed superb anticipation throughout, even saving his teammates from embarrassment at times.

DF Virgil van Dijk, 5 -- Made a shocking error for Arsenal's opener, expecting the referee to give a foul when there wasn't much there. The incident didn't knock his confidence, as he looked comfortable for large periods of the game.

DF Andrew Robertson, 7 -- Provided a smart assist for Mane's opening goal, while there were some other good deliveries into the box.

MF Alex Oxlade-Chamberlain, 6 -- The former Arsenal man was keen to get on the ball and carried it well. However, his distribution was often lacking.

MF Fabinho, 6 -- There were periods where the Brazilian was off with his passing, but he was typically reliable in most of his defensive duties.

MF Georginio Wijnaldum, 6 -- Far too slow with his decision-making on the ball during the first half, even drifting out of the game at times. The Dutchman seemed to play with much more energy during the second period.

FW Mohamed Salah, 5 -- Had a very quiet first half, while an effort from close range was stopped by Emiliano Martinez in the second. The Egyptian didn't have his usual clinical touch.

FW Roberto Firmino, 7 -- Was unlucky when his block from Martinez's clearance went off the post and out. Showed his creative side with some great touches, most notably for the opener.

FW Sadio Mane, 8 -- Showed intelligent movement for the opener, giving himself a simple finish to make. He did his best to drag his team forward in the second half, but missed a fairly good chance to grab the equaliser.

FW Takumi Minamino, 7 -- Came on for Firmino in the 61st minute and looked very lively, injecting some extra energy into Liverpool's attack.

MF Naby Keita, 6 -- Replaced Oxlade-Chamberlain in the 61st minute and showed quality when moving the ball.

MF Xherdan Shaqiri, N/R -- Replaced Wijnaldum in the 83rd minute for his first appearance since January but was fairly quiet.

FW Divock Origi, N/R -- Had an effort blocked after coming on late on for Salah.