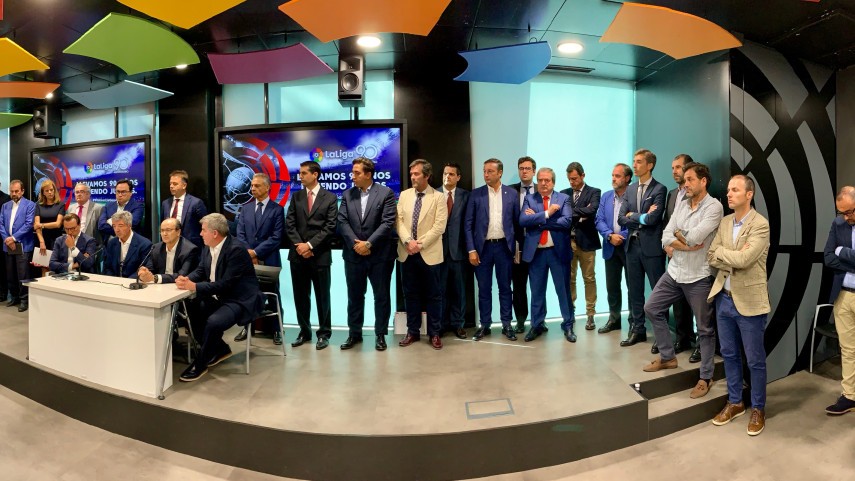 Following the Extraordinary General Assembly held today, 31 July 2019, all of the clubs and public limited sports companies (SADs) which make up LaLiga Santander and LaLiga SmartBank have expressed their unanimous agreement that authority over the scheduling of fixtures corresponds to LaLiga. In an appearance before the media, they wished to express their concern over the damage which could be caused to the clubs, their players and their fans by the assault on their financial interests and on one of the main assets of professional football, their television rights.

Miguel Angel Gil, CEO of Atletico Madrid; Jose Castro, president of Sevilla FC; Francisco Catalan, president of Levante UD; and Manuel Vizcaino, president of Cadiz CD, appeared before the media as spokesmen, accompanied by the rest of the clubs in a photograph, which did not feature a representative of Real Madrid.

The clubs expressed their "profound concern" over what they consider "a violation of LaLiga's powers by the federation". They branded the situation a "direct assault on the clubs".

During the appearance, they stated that revenue from the sale of audiovisual rights has meant "it has not been necessary to raise season ticket prices for fans, allowing prices to be kept the same or lowered".

Furthermore, they stressed that "it is an exercise in responsibility, because commitments have been made to national and international broadcasters and it is not possible to change the rules from one day to the next, because that could have serious effects on the financial health of the clubs and, above all, the credibility of the league".

They all made it clear that this consists of "a direct assault on the stability of the clubs, and not a battle between the federation and the league. This affects the clubs directly, because after many years we have managed to garner respect both domestically and internationally".

"With a certain stability having been achieved within the clubs, the fact that these things are happening is upsetting and of the utmost concern. We are not here on 31 July without good reason. We are doing this because we are deeply concerned," they went on to say in front of the media.

During the event, they recalled the LaLiga "of a few years ago, in which many of the clubs were in insolvency proceedings, in debt to their players…" and now, in contrast, "we are the best league in the world and we need to remain so." They stressed that what has been achieved at this juncture has cost "a lot of hard work and we cannot allow ourselves to take backward steps or for anyone to interfere in what has been achieved so far".