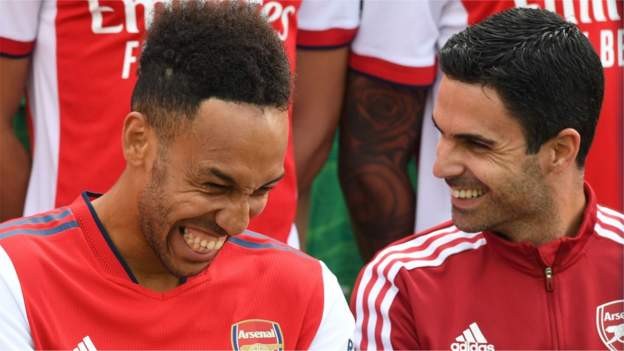 Pierre-Emerick Aubameyang's controversial exit from Arsenal is covered in the latest episodes of All or Nothing: Arsenal

The latest episodes of All or Nothing: Arsenal delve into the fallout between Gunners manager Mikel Arteta and his former captain Pierre-Emerick Aubameyang.

Episodes 4-6 - released on Amazon on Thursday, 11 August - cover the time around Aubameyang's messy exit from the club.

Recap: What happened in episodes 1-3?

In December, the 33-year-old Gabon international was dropped and stripped of the captaincy after arriving late to training, following a sanctioned family trip to France.

He left the club the following month - joining Barcelona on a free transfer after weeks of training alone.

In episode four of All or Nothing, we see Arteta reflecting soon after taking disciplinary action.

"I was really happy when he agreed to extend his contract," the Spaniard says.

"We agreed and set some objectives. I made some compromises, in terms of what he could expect from me. I demand the same things. If somebody breaks some of the non-negotiables, that's a really difficult point."

There is an intriguing scene in which Aubameyang discusses the sanction with a fellow player, who is off screen.

"They asked me if, like, I wanted to speak with them again," he says, before shaking his head and smirking.

It seems clear neither player nor manager is prepared to step back from the brink - but then we do get the sense there is more history to this fallout.

In one scene, Arteta speaks to a press officer, and seems unaware that he's being recorded. The manager says: "That's why I have everything documented with the dates, the times, the conversation, how it happened, why it happened, because if one day it's needed...

"He's been late, apart from all the issues, many times. When you get paid that much money…"

Aubameyang had scored 92 goals in 163 games before being dropped, and was arguably Arsenal's best player. Between him being dropped and leaving, Arsenal scored just one goal.

Aubameyang's potential exit creates a legal and financial headache for the club, and they end up in a race against time to offload him on deadline day.

We also see the moment Edu learns for the first time that Aubameyang has taken an unsanctioned trip to Barcelona, pre-empting his move.

For Arteta, it seems a matter of principle. He tells the documentary-makers about the moment he knew the relationship was over.

"When I looked in his eyes and I saw and I felt what I felt, that that level of trust was gone," he says.

"It's a really difficult decision - in the middle of the season and with the most important player of the club. But if you put all these ingredients together and still, the decision is clear, you have to make it."

Aside from the Aubameyang incident, episodes 4-6 also give us a good look at Arteta's wider approach to discipline.

After the first three episodes showed a softer side to the man, here we get to see some almighty tellings-off in the dressing room.

He is apoplectic at half-time against Everton, and looks like he may explode as the Gunners are knocked out of the FA Cup by Nottingham Forest. There are a number of times when Arteta loses his voice from shouting so much.

And one final moment from episode six that stands out is the team talk before the home match against Brentford.

The newly promoted club humiliated Arsenal on the opening day of the season, prompting Bees striker Ivan Toney to tweet: "Nice kickabout with the boys."

It must have stung Arteta, because he shows the tweet to his players before the return match.

"It's still in my stomach and I have managed to keep it for four months, five months, six months," he says.

Episodes 7-8 are released on Thursday, 18 August

A legendary musician joins Desert Island Discs: John Legend shares the soundtrack of his life Vernon Kay brings you dancefloor classics: Go on a nostalgic trip back to the summer in the '90s