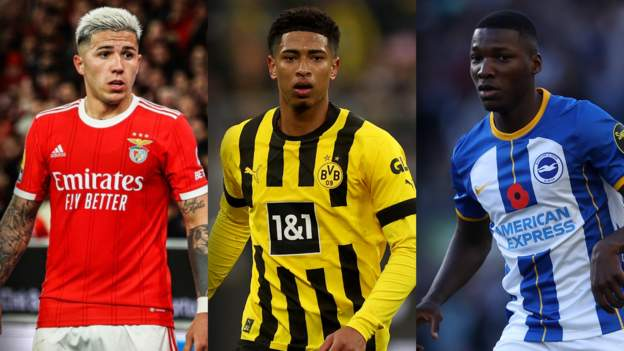 (From left to right) Enzo Fernandez, Jude Bellingham and Moises Caicedo are being chased in the transfer market

The January transfer window has produced several surprises - and there is still time for Premier League clubs to do some business.

Here is everything you need to know before transfer deadline day.

When does the transfer window close?

The transfer window opened on 1 January and will close at 23:00 GMT on Tuesday, 31 January for the Premier League.

New signings are eligible for the next Premier League game if the club submit the required documents by midday on the last working day before that match.

In Scotland, the window shuts at 23:59 GMT on 31 January, while the Women's Super League closes at midnight for international transfers and 17:00 for domestic deals.

Who could be on the move? Borussia Dortmund midfielder Jude Bellingham impressed for England at the World Cup in Qatar

Chelsea are reportedly still trying to sign Benfica and Argentina midfielder Enzo Fernandez despite having bids rejected at the start of the month.

The Blues may also return with an improved bid for Brighton and Ecuador midfielder Moises Caicedo.

Borussia Dortmund and England midfielder Jude Bellingham is attracting lots of interest with clubs including Liverpool, Manchester City and Real Madrid said to be fighting for his signature.

Bournemouth are said to be vying with Southampton for the signature of Villarreal and Senegal forward Nicolas Jacksonexternal-link.

What deals have already happened?Cristiano Ronaldo is reportedly receiving the biggest football salary in history at more than £177m per year

League leaders Arsenal wrapped up the signing of Brighton midfielder Leandro Trossard for £21m and added defender Jakub Kiwior from Serie A club Spezia for £17.6m.

Leeds signed Hoffenheim forward Georginio Rutter for a club record fee of £36m, and Liverpool brought in Netherlands forward Cody Gakpo from PSV Eindhoven in a deal which could rise to £45m.

How much has been spent so far?Chelsea signed Mykhailo Mudryk for a fee rising to £89m on an eight-and-a-half-year contract

More than £437m has already been spent in this transfer window by Premier League clubs.

Chelsea's six signings have cost about £181m - including the £89m transfer of Mudryk - while Leeds have broken their club record for the £36m paid to Hoffenheim for forward Rutter.

Gakpo's move to Liverpool was worth £35.4m-£44.3m, and PSV Eindhoven said it was a record transfer fee received by them.