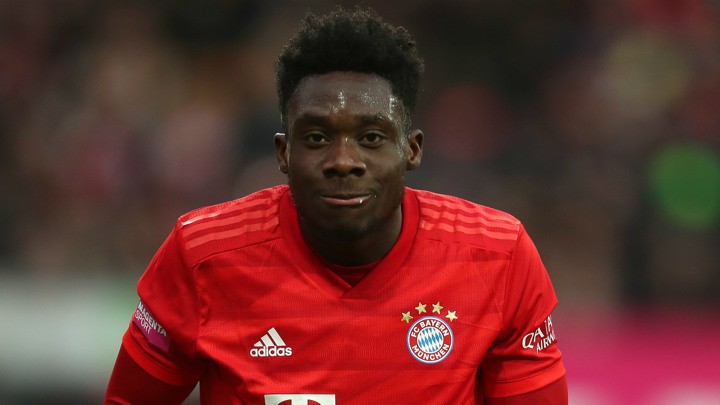 Bayern Munich star Alphonso Davies has admitted that he often relies on his speed to bail him out as he continues to learn the left-back position.

Davies helped his side to a vital win at Borussia Dortmund on Tuesday, as Bayern defeated the Bundesliga's second-place side 1-0 thanks to a Joshua Kimmich goal before half-time.

One of the standout moments in the game also came in the first half, when Davies used his blistering pace to chase down Dortmund star Erling Haaland and deny him a clear chance on goal.

Davies admitted that the reason he had so much ground to make up is because he was caught out of position, and he was happy to have the pace required to catch up to another speedy player in Haaland.

“Obviously being a young player I get caught out of position a lot and I’m happy to have the speed I have," Davies told the Bundesliga.

"That’s a factor in my game that I use very well, but I think over the years going forward with this team I will definitely learn more about my position, better positioning so it doesn’t look like I’m out of position just running back as fast as I can to catch up.”

Davies joined Bayern Munich from the Vancouver Whitecaps last season, with the teenager having made his name with his MLS club and Canada as a winger.

However, Davies has solidified a spot in Bayern's lineup at left-back this season, making himself an ever-present with the Bundesliga champions as they aim for an eighth consecutive German crown.

Tuesday's win saw them take a giant step towards another title, as Bayern now have a seven-point advantage over Dortmund.

Davies' form this season has seen him garner praise from all over the footballing world and Tuesday was no exception as the 19-year-old impressed again.

His team-mate Thomas Muller was blown away by his pace, calling him the "FC Bayern Road Runner" after he chased down Haaland.

Romelu Lukaku joined in the praise in his own way, simply labelling Davies "fast as f*ck" while Declan Rice added: "Wish I had Alphonso Davies' pace".