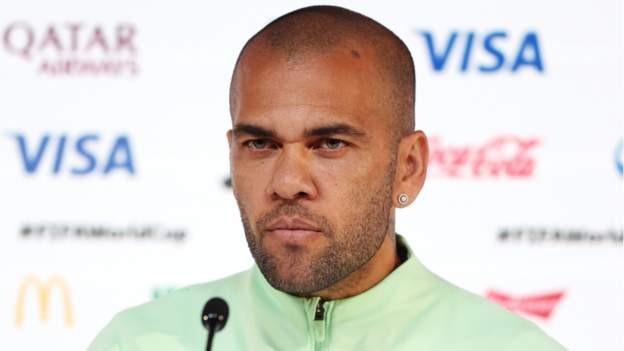 Tite's Brazil will face Ghana, Portugal or South Korea in the round of 16

The 39-year-old full-back, who now plays in Mexico for UNAM Pumas, will wear the armband as manager Tite prepares to make changes.

Brazil have already qualified for the last 16 with top spot in Group G guaranteed if they avoid defeat.

Alves said: "For me, it represents the fact that I can wear the Brazil jersey. It makes me very proud to be here."

The former Barcelona defender has recovered from a knee injury to compete at his third World Cup.

"I've been with the Brazilian squad for many years and to be able to wrap up this cycle, playing a World Cup, makes me very happy," added Alves, who made his international debut in 2006.

"It's been 16 years with the national squad and I've tried to do my very best. Life, I think, always rewards the people who love what they do, who truly do their best in the mission.

"I think I'm reaping what I have planted over those 16 years."

Tite insisted he was not yet focused on the knockout stage, despite the anticipated changes.

"We have 26 great players and I do not have time to be focusing on the broader picture," he said.

"We'll make a few changes, we'll include keys players. In two games we used 19 players. We do not call them starting players or reserves, they are all players."

Cameroon, who came back from two goals down in their previous game against Serbia to draw 3-3, must win and hope Switzerland fail to beat Serbia in order to go through.

Head coach Rigobert Song said: "With regards to what is at stake tomorrow, we know the Brazilian squad off by heart.

"I don't really care about what they're going to do, it's about us. We are preparing as if we're playing a final."

Brazil have won both previous World Cup games between themselves and Cameroon - 3-0 in 1994 and 4-1 in 2014.Brazil have won all seven of their FIFA World Cup matches against African sides, scoring 20 goals and conceding just twice.A defeat or draw for Cameroon will see them eliminated from the group stage of the World Cup in their sixth successive appearance at the finals, last reaching the knockout rounds in 1990. They've never won their final group stage game in seven previous appearances at the World Cup (D2 L5).Brazil are yet to face a single shot on target at the 2022 World Cup, the first team to not face a shot on target in their first two games at a tournament since France in 1998.

We've seen Serbia and Switzerland focus on keeping Brazil out and they both managed it for a while.

The difference is Cameroon need to win this game to have a chance of staying in the tournament.

Brazil might make a few changes now they are through, but if Cameroon open up and play expansive football against them, things are only going to go one way.

Sutton's full predictions for the final round of World Cup games.