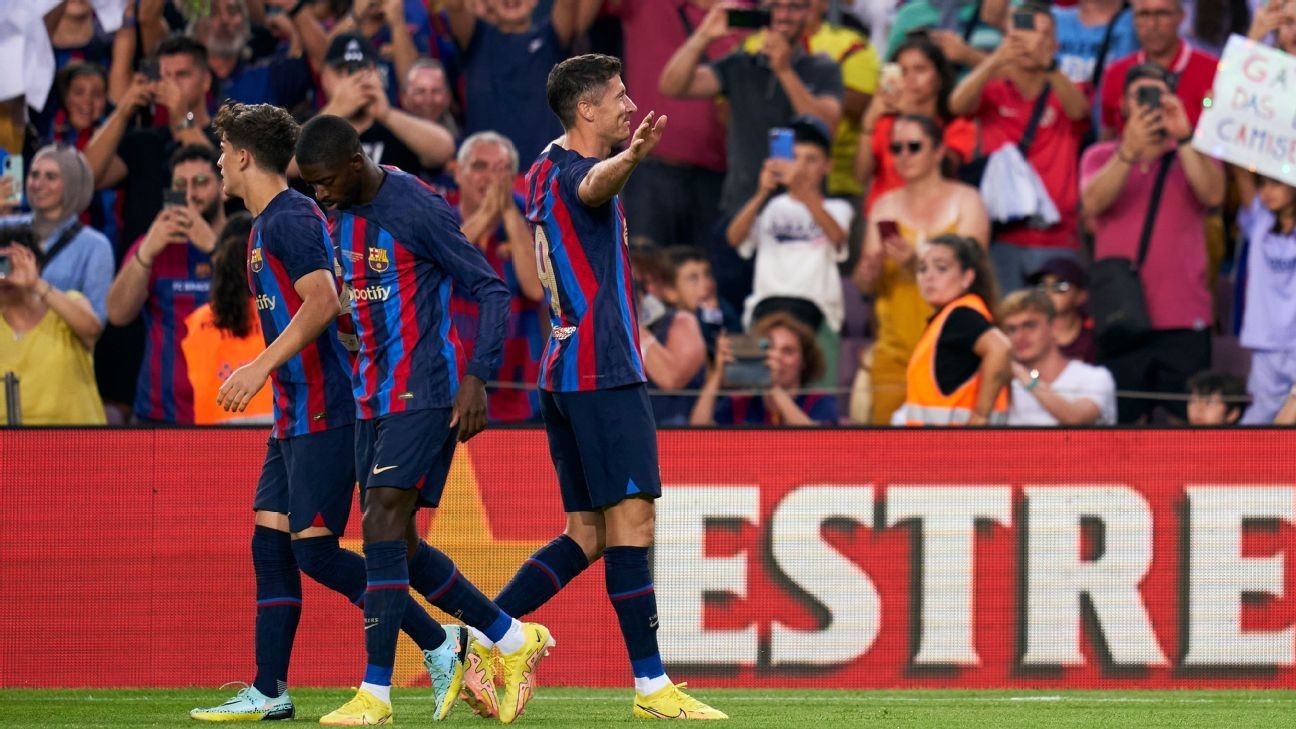 Robert Lewandowski opened his account for Barcelona and Pedri scored twice in a resounding 6-0 win against Pumas UNAM in the Joan Gamper Trophy at Camp Nou on Sunday.

Lewandowski broke the deadlock inside the first two minutes before a Pedri brace and an Ousmane Dembele goal eased Barca into a four-goal lead by the 20-minute mark.

Pierre-Emerick Aubameyang and Frenkie de Jong completed the scoring in the second half as Xavi Hernandez's side rounded off an unbeaten preseason with their fourth win in six matches.

Barca's LaLiga campaign kicks off next Saturday at home to Rayo Vallecano (watch live on ABC, ESPN+ at 3 p.m. ET), while Pumas return to Liga MX action against Club America next weekend.

Despite a trophyless season last time out, there is excitement at Barca once again following a summer of spending, with Lewandowski, Raphinha, Jules Kounde, Franck Kessie and Andreas Christesen all arriving.

They were all presented to a crowd of over 80,000 before the game, with Lewandowski drawing the loudest roar from supporters following his €45 million transfer from Bayern Munich.

The Poland striker had failed to score in three friendlies for his new club so far, but he took less than two minutes to find the net against Pumas, rounding goalkeeper Julio Jose Gonzalez and finishing from a tight angle after a fine pass from Pedri.

That blossoming relationship between Pedri and Lewandowski was the highlight of the first half. Lewandowski returned the favour soon after and then, via a brilliant flick, sent Pedri through for his second goal in the 20th minute.

In the middle of Pedri's two goals, Dembele drilled home his fifth goal of preseason after good work from Raphinha, a €55m signing from Leeds United.

Raphinha and Lewandowski then both hit the woodwork in the space of a minute, but Pumas managed to survive until halftime without conceding a fifth goal.

It wasn't the Camp Nou return Dani Alves had perhaps expected. The Brazilian swapped Barca for Pumas in the summer and was presented with a commemorative shirt by his former club before the game but, like his new teammates, he was a passenger once the match started.

Barca made seven changes at the break and two of the substitutes combined in the 49th minute to make it five. Lewandowski fed Kessie and the former AC Milan midfielder picked out Aubameyang at the far post to complete the scoring.

Aubameyang then hit the bar and saw another chance deflected over before De Jong found the net late. The Netherlands midfielder, linked with a move away from Barca this summer, won the ball back high up the pitch before slotting home to round off an impressive 45-minute performance.

There was almost a late consolation for Pumas, but Jeronimo Rodriguez was denied by a stunning save from substitute goalkeeper Inaki Pena.