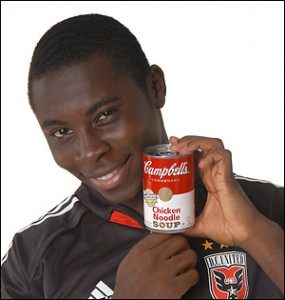 Benfica forward Freddy Adu is still managing to attract a heap of publicity despite his playing career not reaching the heights it was expected to.

The 21-year old, who was born in Ghana, is currently on loan from the Portuguese giants to Turkish second division club Caykur Rizespor and according to his Twitter page, is still attracting media interest just like what he had back in his MLS days when he was a teenager destined for the top.

â€˜The Associated press in Turkey is coming to film my training sessions and follow me for 3 days. I might push for my own tv show lol,â€™ Adu tweeted.

Since his move from Real Salt Lake to Benfica, the former DC United star has had loan spells with AS Monaco, Belenenses and Aris Thessaloniki before moving to Turkey where he has scored three goals in nine appearances.