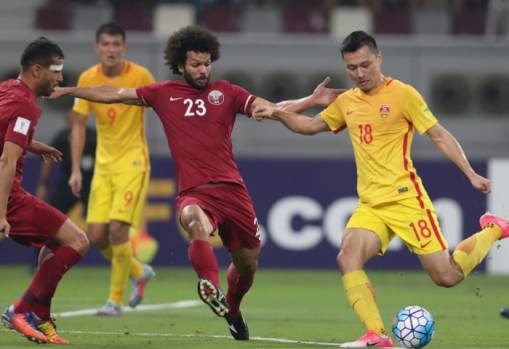 Kuala Lumpur: China overcame Qatar 2-1 in Doha on Tuesday evening to end their 2018 FIFA World Cup qualification campaign with a morale-boosting victory, although it would not be enough to propel them into a play-off berth.

Despite Qatar enjoying the lion’s share of possession, it was China who produced more clear-cut opportunities than their hosts on the night.

Marcello Lippi’s side played to their strengths of pace and power in wide areas to send in 28 crosses into the Qatar area, with two sizeable targets in Xiao Zhi and Gao Lin providing a considerable aerial threat.

China caused Qatar problems throughout, with the majority of their chances created in wide areas. Lippi employed a system which saw left-back Li Xuepeng, later Jiang Zhipeng, allowed to roam forward at will with right-sided colleague Zhang Linpeng often tucking in to maintain defensive numbers.

On the right, width was instead provided by winger Yu Hanchao. Between Yu and his colleagues who occupied the left-back berth, five chances were created from wide — with a further four offered from wide by striker Xiao Zhi. In all, 79.7 percent of China’s attacking play came from the flanks.

With Gao Lin, a natural centre-forward, playing from the left and cutting infield to allow his full-back to overlap, Xiao was allowed to roam from the centre of the pitch — albeit it was he who showed natural striker's instinct to pull China level on the night.

If they had shown better composure in front of goal, China could have scored yet more from their substantial tally of crosses—of which an impressive 35.6 percent were successful—on the night.

Knowing they needed to win with a significant goal difference turnaround to qualify, the onus was on China to attack. However, with Qatar’s attacking trio of Hasan Al Haydos, Almoez Ali and Akram Afif’s pace and skill on the counter attack, they could ill-afford to be reckless.

The trio were a thorn in China’s side all evening, with Almoez twice going close to opening the scoring before his colleague Afif eventually did so in the 47th minute. Five of the duo’s seven efforts on goal (three off target) came in the second half, capitalising on China’s increased attacking urgency.

It was Afif who proved most threatening, going close with two strikes which required saves from goalkeeper Zeng Cheng besides his goal soon after the break.

In addition, the 20-year-old also provoked the sending-off of China captain Zheng Zhi in the 80th minute for a professional foul with Afif threatening to burst clear on goal. With no further defensive cover, the decision was inevitable.

Substitutions make an impact for Lippi

While China will have been happy enough with their first-half showing, it was through their use of substitutes early in the second half that Marcello Lippi’s side really opened up the game.

Jiang Zhipeng, in particular, added a real attacking threat down the left-flank as China gave the Guangzhou R&F man freedom to push forward and attack. In 45 minutes the wing-back provided eight crosses into the area, created two other chances including the opening goal and even got a shot away himself.

The introduction of Wu Lei, also, proved inspired. While Zhang Xizhe had made just 23 touches of the ball in 59 minutes, his replacement Wu made an immediate impact.

A change in shape, moving one defensive player into midfield, allowed Wu to operate higher up the pitch than his colleague previously had and the Shanghai SIPG midfielder repaid his coach’s faith with a late goal to hand China the win—besides one other chance created and two dangerous crosses into the box.