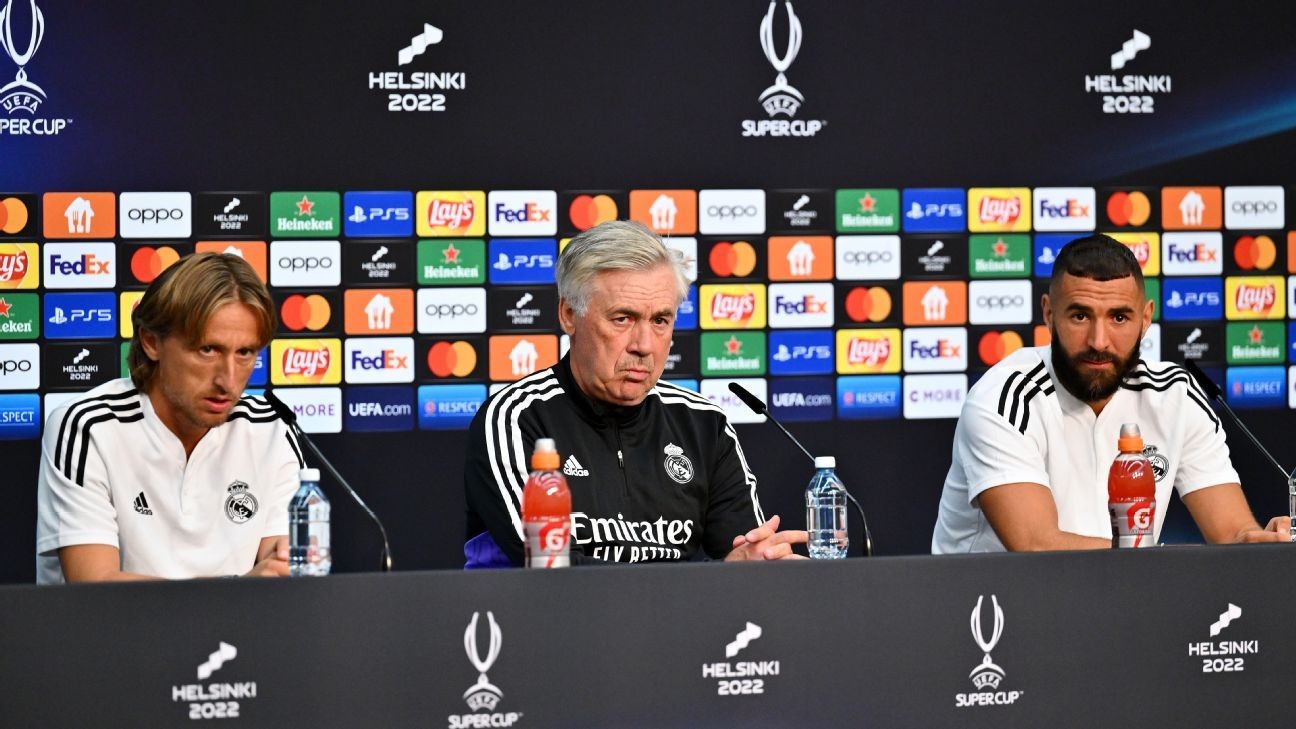 Carlo Ancelotti has said he believes Real Madrid can improve on last year's LaLiga and Champions League double -- and don't need to add another forward to the squad -- as they prepare to face Eintracht Frankfurt in the UEFA Super Cup on Wednesday.

The Super Cup clash with Europa League winners Frankfurt in Helsinki is the first of six trophies up for grabs for Madrid this year, before they get their 2022-23 LaLiga campaign underway at Almeria on Sunday.

"We've signed two players [Antonio Rudiger and Aurelien Tchouameni] who have improved the physical and technical quality of the team," Ancelotti said in a pre-match news conference on Tuesday.

"We've had another year of working together, improving the alchemy between the veterans and youngsters. That was one of the successes of the team last year, and that can improve, because we're more used to being together."

Madrid missed out on signing Kylian Mbappe in May when he decided to stay at Paris Saint-Germain, and forwards Luka Jovic and Borja Mayoral have both left the club this summer, but Ancelotti insisted that the team have sufficient options in attack to challenge on multiple fronts.

"When you're missing the best forward in the world [Benzema] of course that affects the team. But we have solutions. Replacing Karim is impossible."

Benzema -- who will lead the team in Helsinki having been named club captain after the departure of Marcelo -- agreed that Madrid have the players to improve on last year.

"Age doesn't exist," the 34-year-old said. "It's true that we aren't young, but we work hard on the pitch and off the pitch. We have a good squad, let's hope it's better than last year.

"I don't know [if I need a substitute]. There's a coach here and the president too, I'm not here to answer that."

Frankfurt were beaten 6-1 at home by Bayern Munich on Friday in the opening game of the Bundesliga season, but Ancelotti said they are opponents to be taken seriously.

"We won't be fooled," the Italian said. "They played a great Europa League. They deserved to win it, they played some very strong teams. They're a dynamic team with intensity."

Frankfurt confirmed earlier on Tuesday that they would be without forward Filip Kostic for the Super Cup, as the player is in talks over a move away from the club.