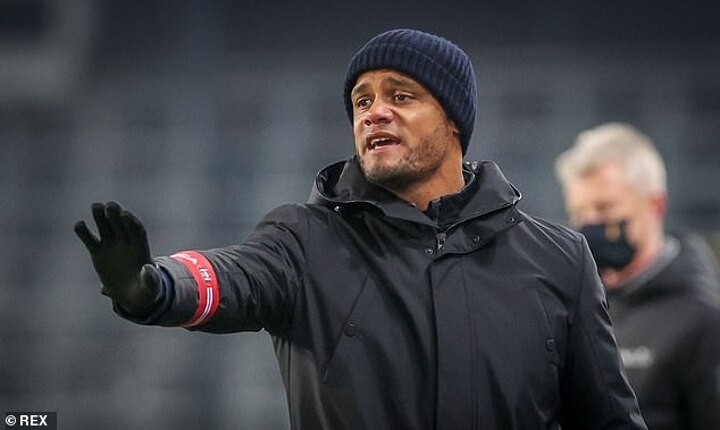 Vincent Kompany has expressed his frustration at constantly being compared to Pep Guardiola, saying his Anderlecht team is 'never going to become Manchester City.'

The former Belgium international defender returned to the club where his career began last year after 11 successful seasons at City, including three playing under Guardiola.

Initially a player-manager, Kompany, 34, took on the Anderlecht head coach role full-time after retiring from professional football in August this year.

They are currently seventh in the Jupiler Pro League having won five, drawn seven and lost two of their 14 matches so far this season.

Inevitably, the Belgian club's style of play has been scrutinised for suggestions Guardiola's coaching influence has rubbed off on Kompany, something that has annoyed him.

'You have to stop comparing with Guardiola because I didn't come here saying that Anderlecht was going to become Manchester City,' Kompany said in an interview with Eleven Sports.

'I never said it but it will stick to me skin even if I never say it.

'It bothers me that we're getting too close to Pep because it's totally inaccessible. It makes the club look like a naive club, but we are not on the pitch.

'No one is talking about reproducing anything. Pep went to Barcelona to draw from [Johan] Cruyff and the Anderlecht I knew and the academy from which all the players came from draw on Ajax in terms of DNA.

'But it's not good for the club to bring this debate back to that and ultimately it doesn't reflect what we're trying to do.

'It's the Anderlecht identity that interests us and that's it. It will be different from other clubs and we have to accept it.'

Kompany added: 'It's always like that in football. When Pep wins everyone will want to play like him.

'I know a way of playing and principles that correspond to what Anderlecht has been historically. It should not be forgotten.

'What will I gain if I ask my players to fall back, throw long ball and create a defensive block? Even if I win the title, my journey is useless.'

Anderlecht, who have won a record 34 Belgian league championships in their history, did not participate in European competition last season for the first time in 56 years.

They sat eighth when the Pro League was curtailed in March because of the Covid-19 pandemic and so didn't quality for Europe once again. It is part of Kompany's brief to restore them to the higher reaches of the table.