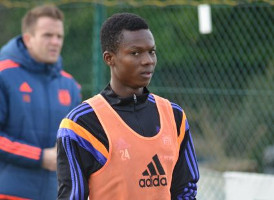 Ghanaian defender Emmanuel Adjei Sowah has been promoted to the Anderlecht first team for upcoming season.

The 18-year-old right back joined the Purple and White in January and excelled with their youth team.

Sowah helped his team to reach the semi-final of the 2015/2016 UEFA Youth Champions League.