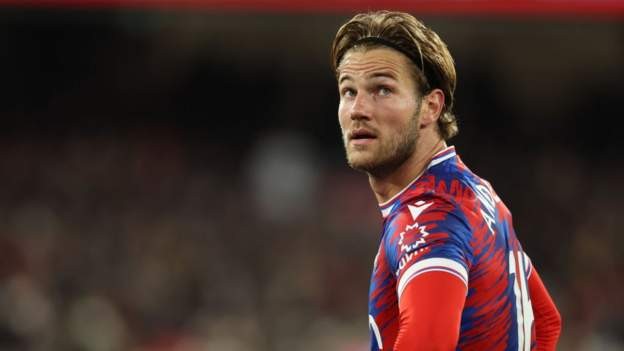 Crystal Palace defender Joachim Andersen says he has received 300-400 abusive messages on Instagram after he was involved in an incident that saw Liverpool's Darwin Nunez sent off.

Nunez was shown a red card after 57 minutes of Monday's 1-1 draw when he reacted to a shove from Andersen with a headbutt that floored the Dane.

Andersen posted examples of the abuse, some of which included death threats.

He has called on Instagram and the Premier League to act.

"Got maybe 3-400 of these messages last night," the 26-year-old said. "I understand you support a team but have some respect and stop act tough online."

He added: "Hope Instagram and the Premier League do something about this."

Palace are set to speak to Andersen to offer support.

BBC Sport understands the Premier League is aware of the abuse and is going to speak to Palace.

In June it was announced that people convicted of football-related online hate crime can now receive banning orders that stop them from attending matches.

While Ofcom analysis of 2.3 million tweets in the first half of last season found nearly 60,000 abusive posts, affecting seven in 10 top-flight players.

In March, the Premier League said it had opened more than 400 investigations into the abuse of its players, managers, match officials and their families over the past year.

Its online abuse reporting system was launched in June 2020.