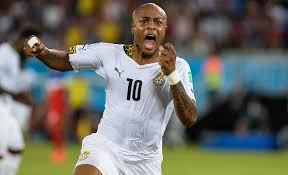 Andre Ayew sent himself into the Africa Cup of Nations history books after surpassing the goals scored by his legendary father Abedi Pele when Ghana defeated a gritty Ugandan side on Tuesday night in Gabon.

The West Ham midfielder scored the only goal of the game to give the Black Stars the 1-0 victory over the Cranes in their opening Group D match at the Port Gentil Stadium.

By converting the spot-kick, which he sent straight down the middle, Andew Ayew scored his seventh Nations Cup goal.

This means he has surpassed the total scored by his father and legendary former Ghana captain, Abedi Pele.

The West Ham winger slotted in a penalty on 32 minutes after captain Asamoah Gyan had been pulled back.

Uganda came close when Faruku Miya hit the outside of a post but could not force their way back into the game.

It was a disappointing return for Uganda, who is playing her first Nations Cup since 1978 when they lost in the final to then hosts Ghana.

The Cranes created few opportunities of note and struggled to get behind the Black Stars, who appeared happy to defend their lead and took the sting from the match.

Ghana was far more positive in the first half, with Andrew Ayew and his brother Jordan, along with Atsu, posing a huge problem for the Uganda defence.

Andre Ayew should have scored from a great cut-back by Jordan, while Atsu relentlessly tormented Isinde, whose day worsened when he conceded a penalty by tugging back Gyan after miscontrolling the ball.

Ghana had a good chance to add a second late on when Atsu was clean through but his 12-yard drive was superbly saved by Onyango.

The only downside for Avram Grant’s side was an injury to defender Baba Rahman, who was stretchered off with what looked like a hamstring injury after 39 minutes.

Ghana, who won the last of their four tiles in 1982 and lost on penalties to the Ivory Coast in the final two years ago, will next take on Mali on Saturday.