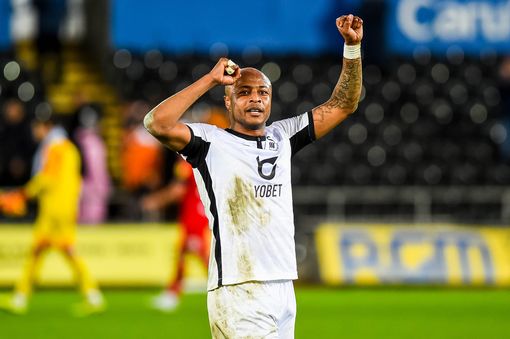 Ghana and Swansea forward Andre Ayew scored his eleventh goal of the season for his side against Huddersfield in the Championship on Saturday.

Swansea City won the game by 3-1 as they push to secure promotion back to the English Premier League.

The Black Stars captain scored the first goal of the game for Swansea City in the 28th minute while Jay Fulton and Jack Garrick secured the win for the home side with the other goals scored.

Ayew has been impressive for Swansea City in the ongoing season where he has rediscovered his form after struggling in the 2018/19 season.

The 30-year old for the first time since the 2015/16 season has hit double figures in the area of goals.

“Needed these points at home. Feels good to back on the scoresheet. Great team work. Jack army was unbelievable!!! Wednesday coming quick, let’s get ready”, Ayew tweeted after scoring against Huddersfield.

He has been impressive this season for Swansea City in the Championship as he hopes to help the club secure promotion to the Premier League.

Andre Ayew  has been included in the Championship team of the Week after this stellar performance.

Ayew was unable to guarantee a permanent stay while on loan to Fenerbahce last season but has received a lot of offers from clubs in Europe according to reports in England due to his performance in the ongoing season.

Swansea is currently ninth on the league log with 51 points.