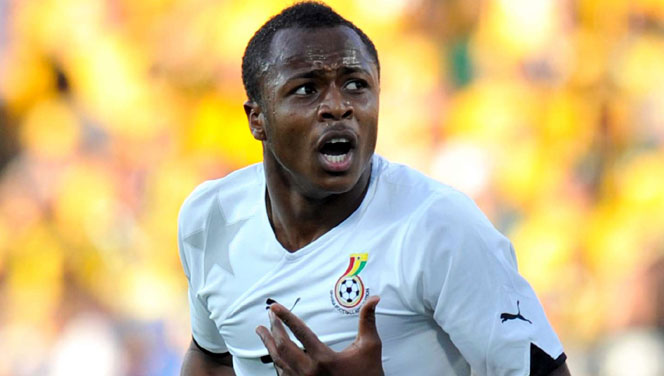 Ghana star Andre Ayew has been named in the five-man shortlist for the 2011 Caf Footballer of the Year award.

The Olympique Marseille ace has been in top form and was named the the club's Player of the Year and look poised to emulate his father who won the award on three occasions.

He also was a key performer for the Black Stars at the 2010 Africa Cup of Nations and Fifa World Cup finals.

Botswana, debutants at next year's Africa Cup of Nations, will compete with Cote dâ€™Ivoire, Niger and Tunisia for the Team of the Year award.

Cameroon, Nigeria and South Africa vie for the Womenâ€™s National Team of the Year award.

El Masryâ€™s Ahmed Elshenawy, Souleymane Coulibaly of Cote dâ€™Ivoire and Ahmed Musa of Nigeria will go in for the Most Promising Talent of the Year.

Coaches Harouna Doula â€“ Niger, Nabil Maaloul of Esperance (Tunisia) and Stanley Tshosane Botswana will battle for the Coach of the Year.

In the Womenâ€™s Footballer of the Year award, Nompumelelo Nyandani of South Africa, Perpetua Nkwocha â€“ Nigeria and Miriam Paixao Silva of Equatorial Guinea will seek for honours in this category.

The Referee of the Year Award will be contested for by Alioum Neant â€“ Cameroon, Noumandiez Doue - Cote dâ€™Ivoire and Djamel Haimoudi.

Former Moroccan international Mustapha Hadji and Austin â€˜Jay-Jayâ€™ Okocha of Nigeria will be honoured with the Legend Award.

The award ceremony will take place at the Banquet Hall in Accra on 22 December.