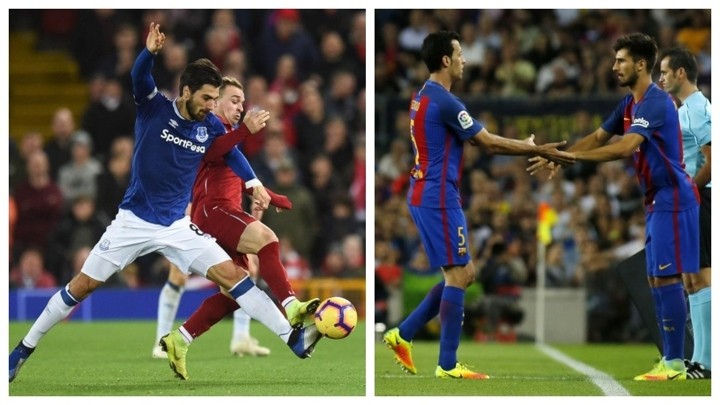 Andre Gomes has revealed how he had to borrow some boots from Sergio Busquets during his first training session as a Barcelona player.

The Portuguese midfielder joined the Blaugrana from Valencia in 2016, but was sold to Everton last summer after an initial loan spell at Goodison Park.

"In my first day of training, I didn't have any boots to play in because of a misunderstanding and Busquets had to lend me some," Gomes told Eleven Sports, laughing as he remembered the moment.

"Being at Barcelona was the high point of my career, I'm very thankful to the club.

"Playing with all those amazing players made me learn so much.

"Wherever I go, I'll take Barcelona with me."

Earlier this season, Gomes suffered what was a horrific looking ankle injury, but, to everyone's surprise, he was back playing 112 days later.

"It was difficult to start with because I had lots of doubts over my injury," he said.

"But, bit by bit, I improved, and watching the team play from the outside gave me a lot of motivation to come back.

"The support of my family and the professionals at Everton was excellent.

"Furthermore, I got emotional at all the messages that I received from fans, teammates, rivals...

"The football family helped me so much and that was key in getting back so soon."

"We have a lot of respect for him because of his past as a coach and player.

"We want to have a lot of success here with him."