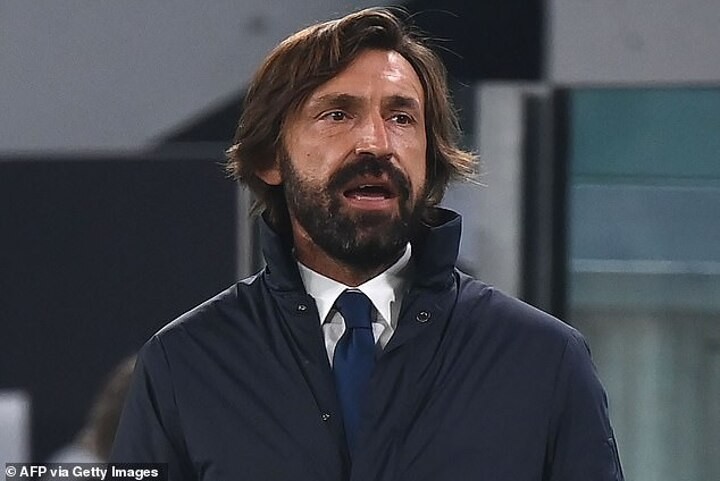 Five games into the new season and his first management role and Andrea Pirlo is staring at a tactical crossroads.

His side have already dropped points with three draws alongside their two wins and have struggled without Cristiano Ronaldo and Paulo Dybala leading the line up front.

Dybala returned at the weekend but his presence was not enough to earn Juventus all three points as they were held to a 1-1 draw by Hellas Verona.

Pirlo has tried out different formations during his opening fixtures with the manager alternating from a 3-5-2 to a 3-4-1-2 and then to a 3-4-3 set-up.

The visit of Barcelona on Wednesday provides the manager with an opportunity to employ a 4-2-3-1 system, but there are still a number of tactical dilemmas facing him across the pitch.

Sportsmail break down the issues from back to front that are plaguing the rookie Juventus boss right now.

On the advice of his former team-mates Gianluigi Buffon, Giorgio Chiellini and Leonardo Bonucci, Pirlo moved away from Maurizio Sarri's overly complicated system.

Pirlo returned to a three-man defence with two attacking full-backs in Danilo and Juan Cuadrado, with a strong centre back pairing of veterans Chiellini and Bonucci.

But with Chiellini joining Matthijs de Ligt on the injury list, rising star Merih Demiral will likely come in to the back four to face Barca this week.

Danilo and Cuadrado have proven to be excellent full-back options and will add solidarity to Pirlo's defence.

Pirlo has failed to settle on a midfield two so far with the manager struggling to find the right balance of attack and defence from the options available to him.

Weston McKennie started the first two games alongside Frenchman Adrien Rabiot before Pirlo switched to Arthur and Rodrigo Bentancur for the draw against Crotone.

Aaron Ramsey played alongside Arthur and Rabiot against Hellas Verona but McKennie will be available to return following his recovery from coronavirus.

US international McKennie will be useful for his aggression while Arthur can operate as a pivot to provide to link up the play against his former side.

Rabiot would provide more energy but Bentancur possesses the strength and technique to play alongside any of the other midfielders. Decisions, decisions.

Two of the wide players available to Pirlo, Dejan Kulusevski and Federico Chiesa, are probably the best in Serie A right now.

Kulusevski was introduced off the bench against Hellas Verona on Sunday and the Sweden international caused all sorts of problems before firing in the equaliser that spared Pirlo his first defeat as Juve boss.

Chiesa was suspended for the match following his red card against Crotone but will likely start against Barca. The former Fiorentina winger can take players on but also possesses incredible strength and endurance which makes him an even bigger threat going forward.

The 4-2-3-1 formation is perfect for the players at Pirlo's disposal. The only problem he faces is who to start in attack...

Ronaldo is so, so fundamental to Juventus. The forward can win games on his own and Pirlo looks to have created a role for him similar to the one afforded to Karim Benzema at Real Madrid.

Ronaldo would play as a false nine but with the goalscoring numbers of a traditional No 9.

The Champions League tie with the Catalans, a game against Ronaldo's arch-rival in Lionel Messi, is the perfect chance for Pirlo to use the 4-2-3-1, which could become a 4-4-2 when out of possession.

With a hectic schedule and Ronaldo still unavailable due to contracting coronavirus, Pirlo may need to rotate his forward options but in Alvaro Morata and Dybala he has plenty of attacking threat to choose from.