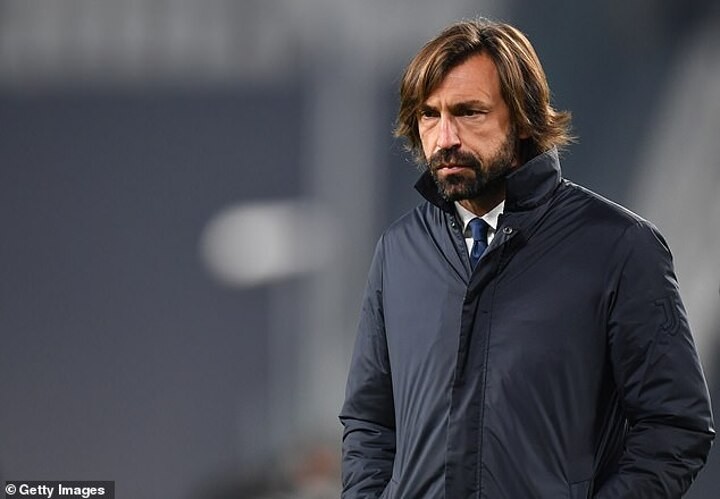 Andrea Pirlo delivered a withering assessment of his underperforming Juventus stars on Tuesday night, and took aim at Arthur and Paulo Dybala in particular.

Juve were off colour as they left it late to beat Ferencvaros in the Champions League, with a late Alvaro Morata goal bailing out the Serie A giants.

The Spaniard's stoppage-time winner secured Juve's spot in the last-16 with two games to spare, but Pirlo was far from happy with what he'd seen across the 90 minutes.

First to feel his wrath was midfielder Arthur, who joined in a £75million deal from Barcelona in the summer.

Pirlo said: 'He got a bit pig-headed today keeping hold of the ball and trying to find more direct through balls when he should've spread it wide and tried to spread the Ferencvaros defence.

'He should've opened up the game more to create one-on-one situations. If the ball moved too slowly, it allowed them to get back into position.'

When asked by Sky Sport Italia pundit Fabio Capello if Arthur had the vision to split defences, he replied: 'Not much right now, but he's learning.'

It was a fourth start in a row for Arthur after a slow introduction since his move from the Nou Camp, which saw Miralem Pjanic head in the opposite direction.

Dybala was handed just his fourth start of the season by Pirlo, and the Italian called on the Argentina international to start doing more in training to earn a regular spot.

He added: 'Dybala didn't do that well, but as I said, he was injured and had to take antibiotics for weeks, so it's natural he needs time to get back into shape.

'He does need to go beyond his limits in training to rediscover his form.'

Pirlo also admitted he was unhappy with how his players approached the game and said he was disappointed with the display.

'We had intended to start with a different attitude, but we know there can be difficulties in games that seem on paper to be simple. We were too superficial at the start and had to chase the game.

'Our first press wasn't vehement, which is normal after so many matches to lose a little intensity, but the important thing was not to get stretched out and allow counter-attacks. We did it a few times in the first half, but then managed to settle down.

'I expected more from the players, but Ferencvaros clammed up, we had to try to move the ball back and forth more quickly to spread them. We moved it too slowly, which made it easier for them to defend.

'Ferencvaros keep a high line and invite you to attack them, but if you don't do it at the right moment, it plays into their hands. When we got the timing right, we were almost always dangerous.'