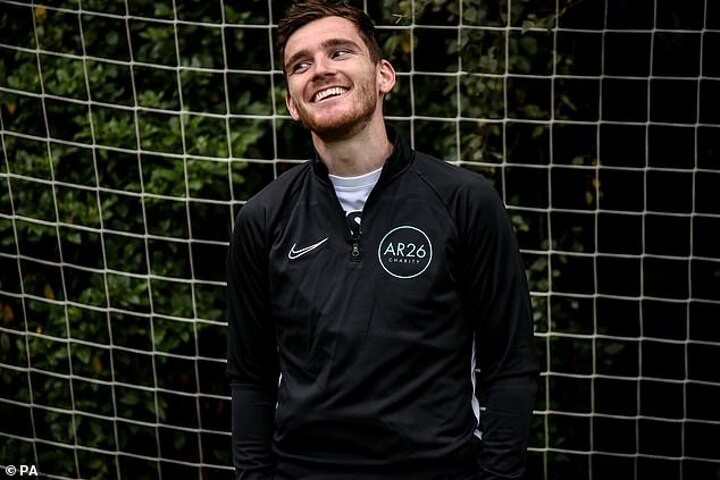 Andy Robertson’s climb to football’s summit is the stuff of legend. His ability to still see the base camp of his life from those rarefied heights, however, will ultimately define him far more than his medals or his wealth.

A Champions League and Premier League winner with Liverpool and the proud captain of Scotland’s national team, the 26-year-old’s journey from teenage rejection to global recognition has been a decade of hard graft in the making.

He’s the first to admit, though, that a gnawing feeling of guilt at the possibility of his success, both sporting and financial, eroding his character or humility has made him fight hard to be the best version of himself he can be.

Earlier this month, Robertson became the first Scotland skipper in a generation to lead his team to a major finals when Steve Clarke’s side so thrillingly took out Serbia in a Belgrade penalty shoot-out.

Few people understand more the magnitude of that feat — but it’s the person the full-back is off the park which matters to him as much as the one on it, manifesting itself in a constant stream of charity endeavours, using the power of the game he plays for the greater good.

Despite his natural discomfort for the spotlight falling on him for anything other than his 90 minutes, he’s aware he has a responsibility to use the amplified voice his elevated status brings to engage the disengaged and level the playing field for the disadvantaged kids in a society he’s finding less civic as the years pass.

So while his contemporaries have their name-and-number ‘brand’ adorning everything from underwear to aftershave, Robertson is shunning the corporate and commercial and instead using his identity to launch AR26 — his own charitable foundation.

‘I’ve thought about this for four or five years now,’ he admits, ‘and talked it through so much with my fiancée Rachel. It’s something we’ve both been passionate about.

‘But it’s been a hard thing for me to do. Anyone who knows me knows I try to stay as normal as possible, be the guy I’ve always been, but it’s hard to do in abnormal circumstances.

‘But I’ve come to realise, my voice carries a lot further now than “the normal guy” I think I am. If I stand on a stage now, kids especially will listen to me more than someone in a normal job.

‘And, for me, that was hard to accept. In my head, if people have something of value to say, it doesn’t matter what they do, or whether they play football.

‘But that’s the world we live in and I’ve come to accept that, d’you know what, my voice can carry and if you can use it to get positive messages across to kids in Scotland and around the UK, then that’s what I’ll do.

‘There’s no better time to do it than when I’m at Liverpool, or when I’m Scotland captain, and people potentially look up to me. What a chance to use that for the greater good.’

Robertson added to his charitable portfolio when he proudly announced an ambassadorship last week with Street Soccer Scotland, a charity aimed at using football to provide hope and opportunity for the socially disadvantaged.

With it, he has found a burgeoning relationship with its inspirational founder and chief executive David Duke.

Left destitute at 21 after the death of his father, Duke is living proof of the transformational power of the game after a successful trial to play in the Homeless World Cup changed his life view. Fast-forward 16 years, he has an MBE and two honorary doctorates from Scottish universities for his social enterprise.

For Robertson, there was no better person to co-opt on to the team of trustees for his own fledgling foundation.

‘He’s an incredible guy, a force of nature, and I’m proud to have him with our charity,’ says Robertson.

‘I mean, I can maybe speak to someone who’s struggling and say: “There’s a better life out there for you” and the answer might be: “It’s easy for you to say”.

‘But to have David by my side as living proof, where he can say: “Fifteen years ago I was homeless”. Street Soccer Scotland is an unbelievable success story and I’m proud I was asked to help.

‘I’m lucky though, I’ve got some fantastic people helping me with AR26.

‘And yeah, the name was my idea!,’ he confesses with a grin.

‘Some people use their name and number for commercial stuff, and that’s absolutely great, the bigger they are, the more it makes sense.

‘But I want AR26 to be something everyone can relate to when it comes to my identity, and I want it to be a success.

‘I’m lucky, I’m happy my family are financially secure for hopefully the rest of their lives, but there’s some guilt associated with that privilege and I think it’s important to give back to the community, and for me that means starting at home in Scotland.’

Robertson started that process two years ago, setting up and funding a partnership with his former boys’ club, Giffnock Soccer Centre, to provide a higher calibre of coaching to their kids through former professional pals.

Now he is moving Pro Academy under AR26’s wing as a funding stream which he hopes will help his charity fulfil the three aims he has for it.

‘The first is through the game itself,’ reveals Robertson. ‘To level the playing field and give kids first chances in life, instead of waiting for them to make mistakes and them not getting a fair crack.

‘Sport is expensive, and it can be a burden for parents who are struggling, so we’re looking to provide free coaching up and down the country to take some pressure off the kids and parents who need the relief.

‘We’ll help people in every situation but not everyone is born into a privileged background or has an easy upbringing. Kids can be born into families with addiction issues, families who struggle to make ends meet, and we want to help kids across Scotland.

‘The second strand is similar to Make A Wish, where we’ll give children who are fighting long-term or life-limiting illness, and try to give them a lifetime experience.

‘I have kids of my own, I hope I have some empathy, not only with those who are suffering but with the parents who endure it with them.

‘If we can give them a wee lift in hard times, whether it’s sending them away to Disney, or taking them for a VIP trip to see Celtic or Liverpool or whoever they support.’

Robertson made the headlines recently when he sent an inspiring video message to six-year-old Leukaemia sufferer Ace Ward and his family, encouraging him through his last course in a punishing regime of chemotherapy. It was done privately, never intended for public consumption, but the Ward family wanted the player’s altruism recognised.

‘I’ve started to realise how much wee things matter,’ admits Robertson. ‘I was always quite shy doing things like that but now I know how much they can mean. We want to go a step further, build a relationship with them and give them something special.

‘Ace was going into his last block of chemo, so it might be something we do with a kid like that to say: “Go and enjoy the rest of your life,” as a well done for fighting cancer or whatever.

‘That’s the part I’m most excited about but I love putting a smile on people’s faces. Even giving one of them a day of forgetting about what they’re fighting has value.

‘And the third part we’re still going through the finer details of but we want a programme helping young adults and teenagers with education and employability.

‘A lot of kids leave school with few qualifications and very little direction, so we’d like to help them get out of what they feel are hopeless situations and make a life for themselves.

‘It won’t happen overnight but these outcomes are the stories we want to tell in a year’s time, two years, whenever.’

To help him tell these stories, he has taken on experienced charity executive Amanda Nisanci.

‘We’re launching at a time when positive interventions are needed now more than ever for young people across Scotland, so we’re looking to make an impact from the outset with our forthcoming Christmas campaign.’

Robertson’s own path to redemption is well documented. On the books at Celtic from a young age but ultimately rejected in his mid-teens for his frailty and lack of physicality, he has proven to everyone that the size of your heart and your desire counts for more.

Having joined Liverpool for a frankly incredible £8million, Robertson, the player, would now be valued near the nine-figure bracket. Robertson the person, however, remains the type who knows value is more important than price.

His grounded humility was never better shown than when he hit the headlines in 2017. Bowled over by seven-year-old fan Alfie Radford donating all his pocket money to a local food bank, he took time to write to him and enclose a shirt as a reward for his human decency.

Self-deprecating to the last though, it was a Roberto Firmino match shirt, signed by the Brazilian icon — ‘because let’s be honest, Alfie, no one wants the left-back’s shirt…’

It’s exactly why you would want the left-back’s shirt, that lack of vanity.

Now, much of Robertson’s continued work with food banks in both Liverpool and Glasgow goes unpublicised — but he’s happy to talk passionately about his disdain for their very existence.

‘The fact we need food banks at all in this country is an affront, a national shame,’ he adds. ‘I believe everyone in the UK should be able to put a meal on the table, but sadly they do exist so the work they do has to be supported.

‘Liverpool do a lot and our rivals Everton likewise, both clubs support the community in the city superbly.

‘The more people who support it, the more food we can provide for people who can’t afford it. And a lot more people are a lot closer to needing food banks that you’d imagine, The numbers are only increasing and that’s something we have to change.

‘But we can change it. A lot of players have a social conscience, and more are realising that the power of the game in communities is a force to be reckoned with.

‘Look at what Marcus Rashford has done during the Covid crisis. His efforts helped more than three million children. Three million. He managed to get a government to overturn a policy decision.

‘Think about the scale of that for a minute, one guy, one footballer with a voice and a cause, managed to do that. Incredible. What an absolute inspiration to the whole country, the way he went about his business. And it proves that rightly or wrongly, your status can help you achieve the extraordinary.

‘I hope we never need to get to that place again, but if we do, I have no doubt that he — or another player — will do what they have to do.’

Andy Robertson is an ambassador for Street Soccer Scotland, which supports people who have experienced homelessness, mental health problems, addiction and long-term unemployment. It has received more than £600,000 in funds raised by players of People’s Postcode Lottery since 2015.