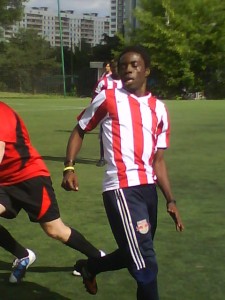 Officials of the Russian topflight side wants to take a closer look at the 19-year-old after impressing scouts while on pre-season with Leki FC.

CSKA coach, Leonid Slutsky has been speaking highly of the Ghana youth after tracking him for one year.

Annan was an initial member of the Ghana squad which won the 2009 African Youth Championship in Rwanda but was dropped due to injury after been named in the provisional squad.