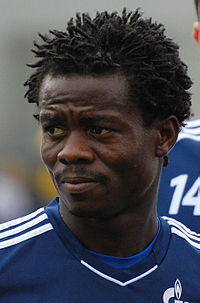 Ghana midfielder Anthony Annan says he is uncertain of the future of his club career despite heightened interest from Vitesse Arnhem.Â

The 25-year-old has impressed at the Dutch club since joining them at the beginning of the season on loan from Schalke 04 where he has had limited first team opportunities.

Annan's exploits in the Eredivisie has prompted officials of Vitesse to attempt turning his loan deal permanent by buying him outright from the German club with whom he still has a two-year contract.

Schalke however appear not to be willing to let him go, a situation which has now gotten the former Hearts of Oak player all confused about where next he will be playing his club football.

"By Godâ€™s grace the people at Vitesse have expressed interest in retaining me but it is not up to me," he told local radio Live FM.

"It is now an issue for my agent and officials of Schalke because you know I still have a contract with them so we wait to see what happens."