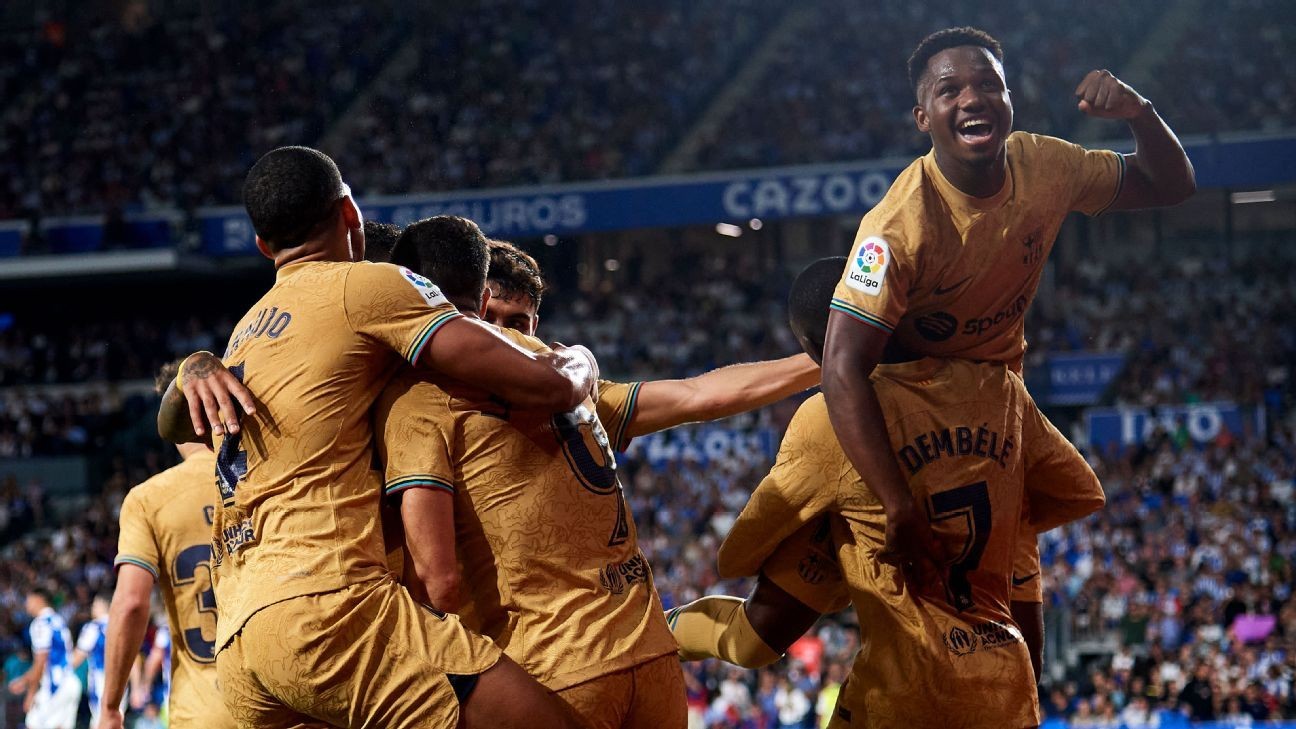 Ansu Fati was breathtaking in his substitute appearance as Barcelona strolled vs. Real Sociedad. Jose Breton/Pics Action/NurPhoto via Getty Images

Ansu Fati, Gerard Moreno and Alvaro Morata are three strikers playing in LaLiga who, if they have a special run of games, are sufficiently talented to inspire Spain to winning the World Cup this winter.

It's just over 90 days until La Roja kick off against Costa Rica in Doha, a month until Spain play Switzerland in their penultimate pre-World Cup warm-up, which means Luis Enrique's already hawkish attention to detail will be at DEFCON 1 right now regarding his potential squad members' form, behaviour and fitness. When these three men, who could feasibly line up together in a 4-3-3 formation -- Ansu left, Morata in the middle and Moreno on the right -- had distinctly different experiences for their club this weekend, Spain's boss will have been drawing important conclusions.

Morata is the one who, on the face of it, got nothing from his Sunday night exploits against Moreno & Co. No win, no goal, no assist: no palpable return for the decent shift he put in trying to dent Villarreal's tremendously disciplined and frustrating defensive structure. But Spain's hard-nosed, deeply idiosyncratic coach absolutely does not judge on "results only." Morata was in a direct head-to-head battle with Moreno, and I'm willing to bet that the 29-year-old actually did enough to advance his claim to remain Spain's starting centre-forward -- so long as he's fit, anyway.

Admittedly the stats are on my side -- Morata has started 17 of the last 21 Spain matches for which he's been available -- and played in 20 of them. The man who has 26 goals in 56 internationals managed to put efforts on target, linked well with Joao Felix and pressed his yellow-shirted opponents.

Meanwhile, long before Villarreal opened the scoring and before Moreno added that late second goal, Villarreal's saturnine, talented, tough-minded attack-leader was having a bad day at the office. He lashed out at mis-hit volleys, badly mistimed a diving header, and even headed up and onto the bar when he should have scored, before inexplicably choosing to punch the rebound into the net rather than just stopping down properly and heading the ball beyond Jan Oblak.

Typically, however, Moreno was still on the pitch with seconds left in order to profit from a terrific Alfonso Pedraza counterattack and bury Villarreal's winner.

Gerard Moreno had been rather poor throughout Villarreal's win over Atletico Madrid, only to score a late insurance goal. Oscar J. Barroso/Europa Press via Getty Images

Some might say that's the difference between the two men. Morata is sparky, diligent, aerially good and a regular scorer, but he's too easygoing and lighthearted to be the kind of hard-nosed, win-at-any-cost goal-grabber that Moreno most certainly is.

The junior partner in this equation Ansu is, literally, a phenomenon. There will be plenty of time before the World Cup to analyse his play and appreciate that, after some of the most brutal luck with injuries, operations and recuperation, he genuinely looks as if he's back. Big time.

Nor should anyone ignore Ferran Torres (Barcelona), Dani Olmo (RB Leipzig), Mikel Oyarzabal (Real Sociedad), Yeremi Pino (Villarreal) or Pablo Sarabia (Paris Saint-Germain) either, but Morata is clearly in pole position to occupy that centre-forward spot. His career record sparkles -- spells at Real Madrid, Chelsea, Atletico Madrid and Juventus, collecting 19 winners' medals -- yet some will argue that all that glitters isn't gold.

Morata's consistently had to bounce around from club to club, seeking approval and in search of a place to call "home," but in the process, he's changed radically. We're looking at someone who's won the title in Italy and Spain, who's played in three Champions league finals -- scoring in one of them, winning the other two -- has been European champion with Spain at two different age categories (and tournament top scorer each time) yet there will be many doubting he can propel Luis Enrique's team to the big one in Qatar.

Morata's happy-go-lucky nature and "big kid made it good" personality have might have hindered him being the best version of himself as a footballer. Now, though, he's come through a brutal back injury and some serious mental anguish; he's happily married and a dad to three kids plus, crucially, he's spent years training every day against Giorgio Chiellini, Leonardo Bonucci and Gigi Buffon. No quarter asked or given there.

Alvaro Morata has struggled to find any semblance of consistency between moving clubs and a slew of injuries. DAX Images/NurPhoto via Getty Images

No longer is Morata the guy who was happy just to be "along for the ride." Maturity might have come late, but he's there now. It's partly thanks to a few successful experiments with psychologists -- notably Joaquin Valdes, who has been Luis Enrique's right-hand man wherever he's coached.

Last summer, at the height of the abuse he was taking from stupid, intemperate Spain "fans," Morata explained about Valdes: "He's been a great help and we don't just talk about football. Players are simply human beings with our own fears and insecurities, many of which have nothing to do with our profession.

"It's good to have people around you you can talk to and who can help. We take our bodies to the gym, we use specialist physios to be in peak condition, we are scientific about our diet: why shouldn't we attempt to 'train' the brain?"

One of Morata's most common themes is the disparity between football, as a career, and the way other professions evolve and are constructed. He argues: "One of the unfortunate things is that in other professions, you do your University studies, then your Masters and just as you hit your late 20s or early 30s, you're professionally mature, but the rest of your career lies in front of you. For us, once you hit your mid-30s, that's when people start to consider you old and past it."

During the last European Championship, the distasteful rubbishing of his abilities and character reached such a level that he was "struggling to want to get out of bed, not keen to leave my hotel room... until team mates or a conversation with my wife helped bring me out of that."

Recently, Morata told Mens Health: "Complicated personal moments help teach you to put everything in context. I look at the situation in many countries around the world, and I can accept that losing a match or missing a chance are important, but only to a certain extent.

"Football connects to the emotions of so many people that if things aren't going well, it's hard for them to remember we're only human beings. We need to remember we are healthy, we are lucky to be doing what we do and we have our families to go home to -- that's what really matters in life".

There's no feeling of charity from his national team coach because Morata is likeable, open, honest and coming to the sweet part of a personal journey to plenitude. It's imperative he continues the form, and attitude, he's shown not only against Villarreal, but in scoring a hat-trick against Juventus in the last pre-season friendly, then two more against Getafe on Matchday 1. However he's in pole position for Spain partly because he's fully signed up to the Luis Enrique philosophy.

"All the boss asks of me is to give absolutely everything until I've got no energy left, then to raise my arm and ask to come off -- that's fundamental. He wants a kind of link play from me to help us pass out from the back and frankly, I've adapted to a style that no team I've ever been in has used.

"I think it's time for the Spain fans to get switched on to the fact that something great is coming. We've got good players and if we feel criticised instead of supported, then it'll be harder to achieve something great."

Mature Morata: finally. Spain and Atletico stand to benefit if it continues.