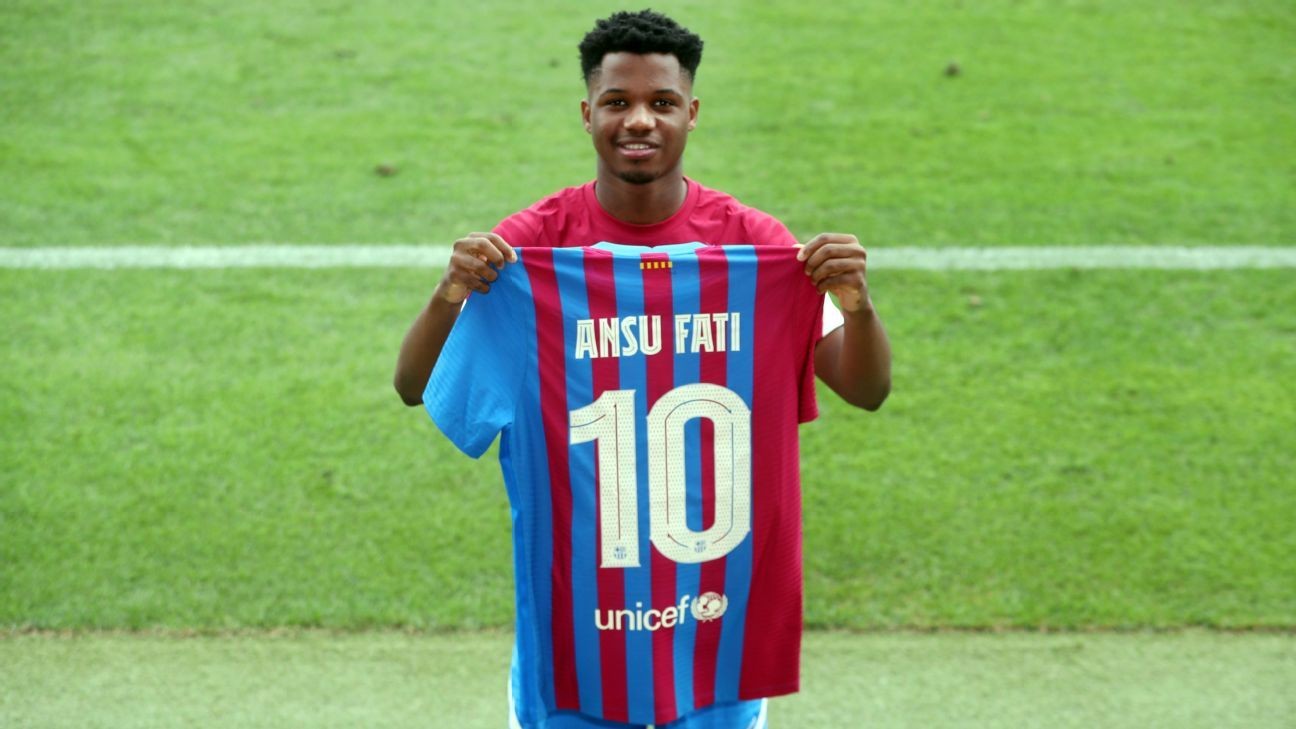 Barcelona teenager Ansu Fati has said wearing the No. 10 jersey after club legend Lionel Messi does not bring additional pressure.

The Spain international spoke about following in Messi's footsteps after he signed a contract extension with Barca until 2027 with his release clause rising to €1 billion ($1.16 billion).

"It's true that the No. 10 jersey has been worn by Leo [Messi] and many players but I'm calm," Fati, 18, said in Thursday's news conference. "I know what I can bring to this team.

"Any player could have worn the No. 10. I'm grateful that the captains offered me the number and luckily, I got it. It's an extra motivation for me. I don't look at the number but focus on what I can do on the pitch to help the team," he added.

Messi joined Paris Saint-Germain this summer after Barca were unable to register his contract due to financial restraints.

"We were in no hurry, but we didn't want to drag on the issue," Barcelona president Joan Laporta said on Thursday about the No. 10 jersey.

"We didn't put any pressure on Ansu. He said he would take the No. 10 if the captains would authorise it. We want to take pressure away from him but the No. 10 suits him very well because of his style of play. The public are in love with him and are with him. He is very motivated."

Barca have high expectations of Ansu, whose previous deal was set to expire next summer. Laporta added: "It was very important for us to regularise this [Ansu's future] situation. He is someone we love. He is 18, he has an extraordinary maturity and a superlative football talent. He is destined for glory. We have great hopes placed on him. We know he is a reality. He has a gift. He is very intelligent.

"Today is a great day for Barca. It's a very important day for us because the present and the future of the club with players like Ansu Fati is assured. I wasn't very worried because he wanted to stay at Barca. His family and agent [Jorge Mendes] knew that the best place for Ansu to continue his career is at Barca. We are going to help him achieve his aims. His aims are our aims."

Ansu's contract extension comes a week after another 18-year-old, midfielder signed a new deal that will keep him at the Camp Nou through 2026.

Barca are also keen on midfielder Gavi, 17, to sign a contract extension with his existing deal expiring in 2023.

All three have already made their debuts with the Spain team. "It would be a dream come true for us to have a high-quality starting XI that come from the Masia to the first team," Laporta said.

"We are lucky to have many players that are coming through."