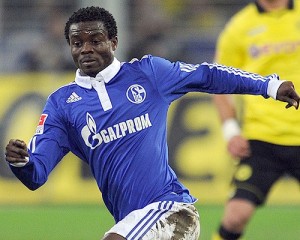 Defiant Ghana midfielder Anthony Annan has rejected two offers to prise him away from German side Schalke insisting he will fight for his stay.

Two clubs from Denmark and Turkey were keen on signing him from the Bundesliga club who are keen on releasing him.

This came after Schalke declared that Annan is surplus to requirements at the club and wanted to sell him.

It has emerged that Annan rejected the two offers insisting he wants to stay at Schalke and fight for his position at the club.

There were several interesting offers for him (Annan), some from Denmark and Turkey, but he and his advisers have so far refused everything," Horst Heldt, the sporting director ofÂ  Schalke said. Schalke announced last week that they want to sell Annan after just six months at the Bundesliga side.

He joined Schalke in the January transfer window from Norwegian side Rosenborg but has failed to impress since his move.

Annan has also struggled recently in the Ghana national team as a toe injury has put Agyemang Badu ahead of him in the pecking order.