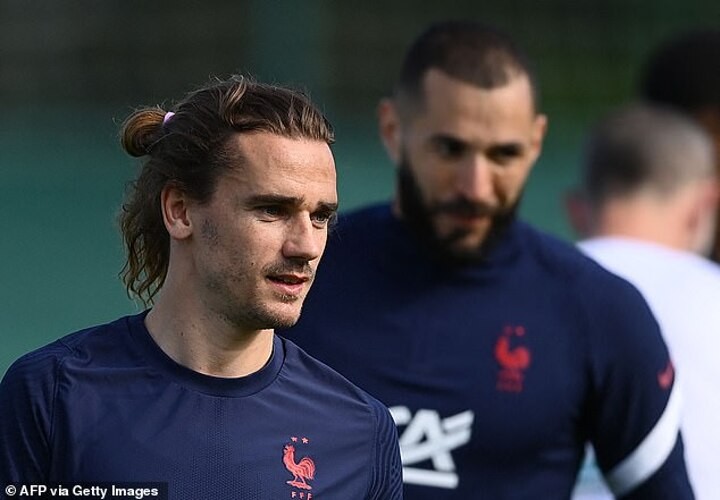 Karim Benzema's wait for a goal goes on and, until it ends, doubts will linger about the decision by Didier Deschamps to end the striker’s long international exile.

Thirty goals for Real Madrid caught the eye but Benzema, 33, has not found the net in four games for France and some fear his return to partner Kylian Mbappe in attack at the expense of Olivier Giroud has disturbed the delicate balance of the team.

‘When you’re a striker you need to score to be free and able to play,’ said Antoine Griezmann, who grabbed the equaliser in a 1-1 draw against Hungary in Budapest on Saturday.

‘He wants to score just like Kylian and me. We all support him and have confidence in him. The staff and players alike want him to be in the best position possible. We hope his goal comes quickly but we have to be patient. He has had some great opportunities so I’m sure the goal will come. He helps a lot in the attacking relationship and, as soon as he does score, the water will start flowing.’

Benzema’s last goal in international football came against Armenia in August 2015, before a six-year exile for his role in an alleged blackmail plot against a team-mate, Mathieu Valbuena.

His return appeared set to strengthen France but he has been frustrated in the two warm-up friendlies and two Group F games.

Benzema saw a goal ruled out for offside against Germany in Munich on Tuesday and sliced wide a good chance in the first half against Hungary.

Giroud is the striker who has made way, demoted to substitute, although he is still an important figure in the French camp.

‘I eat with him at the table and the man is always smiling,’ said Griezmann. ‘He motivates the team and he gives everything in training. It is exceptional to have someone like that.

‘It’s not easy for him, for sure, but he’s always ready to make a difference on the pitch and frankly it’s brilliant what he’s doing for the group. That can only help us on the pitch.’