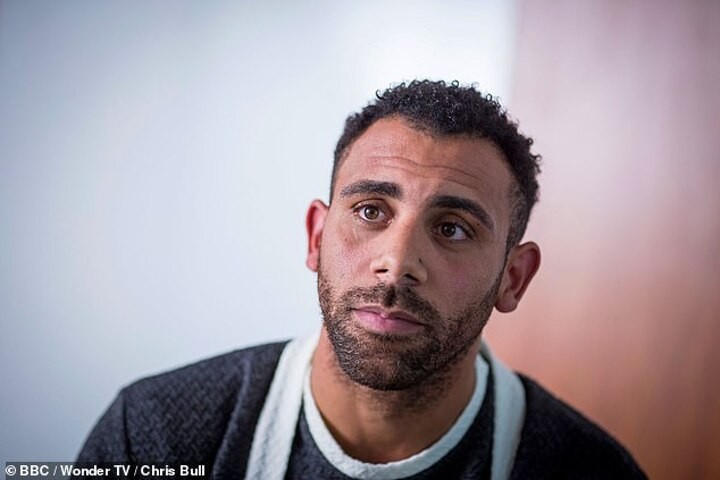 Anton Ferdinand is describing the moment he first found out he had been racially abused by the England captain.

It was October 2011 and QPR had just beaten nine-man Chelsea 1-0 in a bad-tempered West London derby in which Ferdinand and John Terry had been involved in a heated verbal exchange.

After the match, Ferdinand went to see his family in his hospitality box at Loftus Road, oblivious to the fact he was at the centre of the biggest racism storm in English football history.

‘I walked into the box with a swagger because we had just beaten Chelsea,’ recalls the 35-year-old. ‘My mum said, “Anton, are you alright?” and I was like, “Yeah course, we just beat Chelsea”. My wife said to me, “Well you better have a look at this” and handed me her brother’s phone.

‘This is the first I am seeing it. I am looking at the phone and rage just came over me. You know when you say your blood boils? It just hit me.

‘I couldn’t believe what I was watching. I felt hurt but mainly anger towards him. I wanted to go and hurt him.

‘It was only because my mum was at the game. She was the only person who could have stopped me. She said, “I know what you want to go and do but now is not the time”.

‘After that moment things weren’t the same. The way it was dealt with afterwards made things escalate out of control.’

Ferdinand is speaking for the first time about the events of nine years ago in a powerful new documentary – Football, Racism and Me – which airs on BBC One on Monday.

He stayed silent in public at the time on the advice of lawyers, who did not want to prejudice a potential criminal case. But speaking to a psychotherapist on the programme, Ferdinand admits: ‘I still carry that feeling of letting people down for not speaking up. I still feel guilt and that eats away at me more than anything. I don’t know how to get rid of it.’

After video footage of Terry’s outburst at Ferdinand went viral, a member of the public made a formal complaint to police about the Chelsea centre-half, who was stripped of the England captaincy in February 2012. Five days later, Fabio Capello resigned as the national manager.

The case went to trial in July 2012. Terry’s defence was that he thought Ferdinand had accused him of saying ‘f****** black c***’ and he had merely repeated the words back to him, while denying he said them first.

Although the court found Terry’s version of events to be ‘unlikely’, there was sufficient doubt and he was cleared of racial abuse.

The FA, though, required a lower burden of proof for their own investigation and two months later they found Terry – who they had already sacked as captain – guilty of racial abuse and banned him for four games.

‘When Terry lost the captaincy, it was like it became my fault and everywhere I played I got booed,’ says Ferdinand. ‘It felt like I was the one who deserved to be racially abused.

‘Things were thrown at my mum’s house - eggs, bricks, the lot. I got hate mail saying, “I am going to rape your mum and your sister” and bullets in the post.

‘My social media was going crazy. Abuse after abuse. You mentally can’t deal with it. I can stand there and be macho and say I wasn’t traumatised but I actually was.

‘All that love was ripped out of me. I hated the game. I wouldn’t want my worst enemy to feel the way I felt.’

Shockingly, Ferdinand has been racially abused on social media again this week after promoting his documentary, in which he heartbreakingly admits to feeling guilt for his mum falling ill with cancer and dying in 2017.

‘I wish that it didn’t have the impact that it did have on my family,’ he says. ‘It would have hurt my mum to see me go through this in front of the whole of England. That’s when she started to get ill.

‘My mum died from cancer and I sit here today and think is that my fault. I played a part in these things happening to my family. ‘

On the programme, Ferdinand emails Terry in an attempt to talk to him for the first time since the Loftus Road tunnel, when they had hugged after the now Aston Villa coach had asked ‘are we cool?’ and described their exchange as ‘a bit of banter’.

Terry did not respond to the email. Instead, his representatives told producers he ‘wanted to move on with his life and career and doesn’t want to reopen a case on television that was decided in court’.

‘I saw John Terry take the knee, fair play to him,’ adds Ferdinand, who has never had an apology from the former England team-mate of his older brother Rio. ‘I hope him taking the knee and showing he is against racism is sincere. I hope it is coming from a good place. But don’t just take a knee, come and speak about it.’