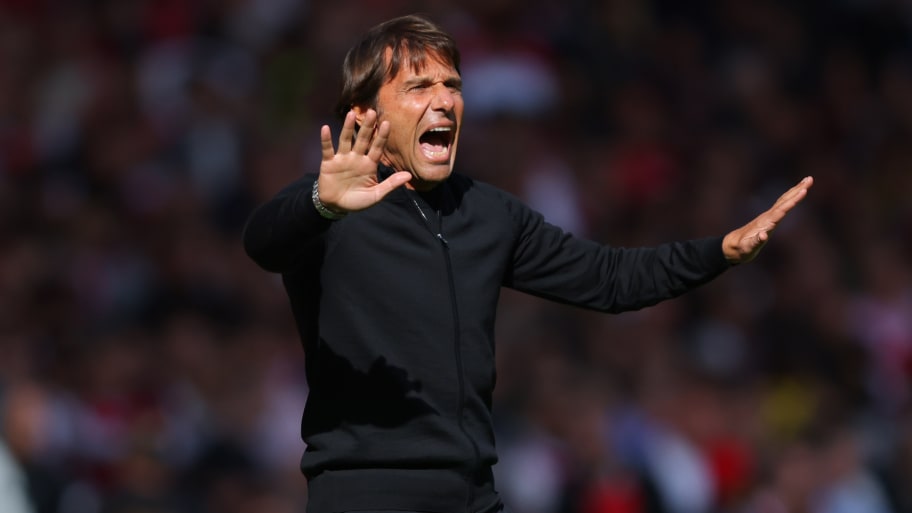 Heading into half-time of Saturday's north London derby, Antonio Conte must have been the happier of the two managers.

Tottenham fell behind at the Emirates Stadium after being penned in for much of the opening 25 minutes, but responded brilliantly by leaning on Arsenal's youthful overexcited nature. Amid the chaos, Richarlison won a penalty for Harry Kane to score and Spurs went in having made the better chances.

But minutes after the restart, Hugo Lloris spilled a cross back against Cristian Romero's shins, was unable to adjust himself accordingly and Gabriel Jesus poked the Gunners back in front from all of one yard.

As Tottenham tried to mount the strength and find another equaliser, Emerson Royal put in a ridiculously high challenge on Gabriel Martinelli's Achilles, earning himself a red card. Granit Xhaka iced the game with a well-taken strike soon after.

It's a victory that has handed Arsenal a) bragging rights and b) fresh belief that they are in fact in a Premier League title race. For Tottenham to have gifted them such luxuries is a criminal offence at the other end of Seven Sisters Road.

At 11 vs 11, Conte looked to have gotten his game plan spot on. Arsenal had a lot of the ball but - Lloris' parry aside - were reduced to half-chances. The visitors' plan to hit them on the counter looked fruitful, but lacked the precision which would have been provided by Dejan Kulusevski, who sat out the derby with a hamstring problem and Tottenham now look a little dependent on to make chances.

Spurs have made tremendous strides under Conte, but their subpar performances so far this season - and there have been a few - have deeply exposed his preferred XI's weaknesses and his own blindspots. Leaning on Emerson was always going to end in disaster sooner or later regardless of how much money he's spent to better himself. An unwillingness to switch tactics can make them predictable.

Conte doesn't need to rip up his footballing blueprint and start again because, ultimately, Tottenham have made immense progress in his tenure and are still pretty good bets to finish in the top four. But he can't keep hiding behind results when performances have notably dipped.

At the back end of the 2021/22 season, Spurs looked like the third or fourth best team in the league and deservedly pipped Arsenal to the final Champions League spot. The Gunners, through transfers or otherwise, have reached another level since then.

Tottenham are yet to hit their peak - that was the overriding narrative from the blue-and-white corner heading into the derby - but they won't just magically reach their best levels again.

Conte continually talks of wanting to build and win something special at Spurs. He doesn't label the Premier League or Champions League by name, but that's clearly what he means. They aren't going to reach those goals at this current pace, maybe not even last season's. Their best chance is with the Italian changing his tune from the campaign so far, much like when his Chelsea side were embarrassed by Arsenal in the autumn of 2016.

Whether it's a change of system, trusting of summer signings like Yves Bissouma or Djed Spence, or a team-wide evolution - it doesn't even need to be a revolution - Conte can still find success. The derby loss can't be swept under the rug, however.

This article was originally published on 90min as Antonio Conte needs to be forced into another Arsenal-inflicted evolution.