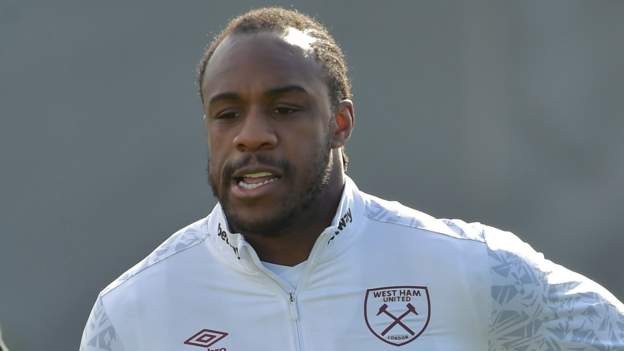 Michail Antonio signed for West Ham from Nottingham Forest in 2015

West Ham United manager David Moyes says Michail Antonio could still play for England after it was reported the forward was considering switching allegiance to Jamaica.external-link

The 30-year-old has twice been named in England squads but has yet to feature.

"I only found out about it yesterday and I've not had a direct conversation with Michail," Moyes said on Friday.

"I am still holding out he has a chance to get picked for England. I wouldn't say no to Jamaica."

Antonio qualifies for Jamaica through his parents, and he told BBC Sport in 2016 that he turned down the opportunity to play for the nation because he still had ambitions to represent England.

The former non-league player has scored six goals this season for the Hammers, who are fourth in the Premier League and face leaders Manchester City at Etihad Stadium on Saturday (12:30 GMT kick-off).

'Things are quietly ticking along'

Meanwhile, Moyes said he is not considering leaving the Hammers, having this week been linked to the vacant position at Celticexternal-link following Neil Lennon's departure.

The 57-year-old Scot, who began his playing career at Celtic Park, has a deal that expires this summer, although he revealed that there was a clause in the contract which would result in an extension.

Moyes said: "I've got no intentions of going anywhere. I've already spoken to [co-owner] David Sullivan, we're up to date and things are quietly ticking along.

"Contracts are not that important in football management.

"The truth is I've got something that, if we finish above 13th, automatically kicks in anyway if I choose.

"It's still my choosing. There's no big panic. I don't feel under any pressure with it and I don't want anybody else at the club to feel that either. We'll get it sorted."